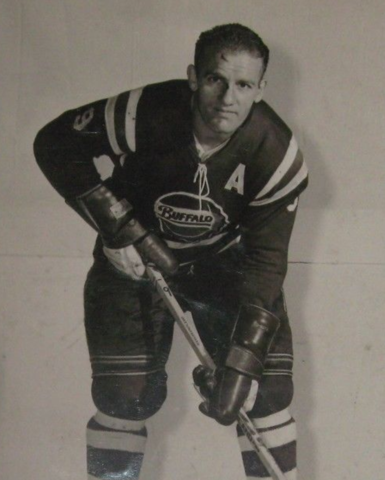 Wilson played his junior Hockey his older brother Johnny with the Windsor Spitfires, and the Windsor Hettche.

Wilson then joined the Omaha Knights of the United States Hockey League in 1949, and scored 22 goals and 57 assists that season, which got the Detroit Red Wings interest. Wilson Played 1 regular season game for the Red Wings and 4 playoff games during the 1950 Stanley Cup playoffs in which the Red Wings were crowned champions, and Wilson got his name engraved on the Stanley Cup.

Wilson then played for the AHL Indianapolis Capitols for the next 2 seasons, while also getting called up by the Red Wings 2 times for 5 and 15 games.

Wilson played the 1952-53 season with the WHL Edmonton Flyers, and was then traded to the Chicago Black Hawks by Detroit with Larry Zeidel and Lou Jankowski for cash, August 12, 1953, and he appeared in 66 games with the Black Hawks, scoring nine goals and 33 assists for 42 points. That was followed by a 23-point season the following year.

Wilson was traded to the AHL Buffalo Bisons, and began a 13-year stay with the Bisons that would see Wilson become that franchise’s all-time leader in every offensive category.

In his first season with Buffalo, Wilson was named a Second Team AHL All-Star after scoring 39 goals and putting up 78 points in 62 games. He helped the Bisons to the Calder Cup Finals in 1959 and picked up another Second Team All-Star nod in 1959-60 when he led Buffalo in team scoring with 33 goals and 78 points.

Another trip to the Finals ended in a loss to Springfield in 1962, but Wilson and the Bisons finally brought the Calder Cup back to Buffalo in 1963 after finishing with the best record in the league and knocking off Hershey in a tense seven-game series for the title.

Although his offensive numbers began to decline, Wilson remained an integral member of the Bisons organization, and he returned to the top of the team scoring page in 1966-67 when he notched 28 goals and 37 assists in 65 games.

Wilson played his last game in the AHL in 1968, and at that time his 790 career points were good for sixth all-time. Today, he ranks 12th in career scoring, ninth in assists (492) and 13th in games played (899). He finished among the AHL’s top 10 in scoring on five occasions during his career.

Wilson finished his career playing two seasons for the Dayton Gems of the International Hockey League. In his final professional season, at the age of 39, Wilson played in 68 games, had 20 goals and 43 assists for 63 points.

Following his playing career, Wilson began coaching and in his first season behind the bench led the Providence Reds to the Calder Cup Finals, where they lost to a Springfield Kings team coached by his brother Johnny. During his tenure with Providence (1970-72) and the Richmond Robins (1972-76), Wilson coached several future AHL and NHL bench bosses including Bill Barber, Paul Holmgren, Terry Murray and fellow AHL Hall of Famer John Paddock.