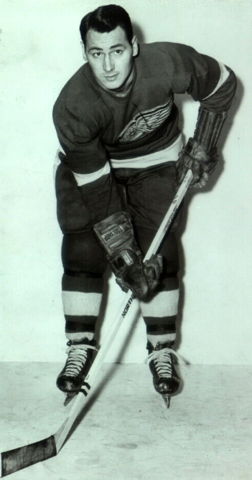 Peters played his early Hockey in his hometown, also playing his junior Hockey there, and would help the Verdun Maple Leafs reach the 1940 George Richardson Memorial Trophy finals, losing to the Oshawa Generals.

Boston legend Eddie Shore had seen Peters play in the Memorial Cup series, and after Peters had turned pro, acquired his rights to play for the Springfield Indians in the American Hockey Association / AHL. Peters played just 1 season in Springfield, scoring 2 goals, 10 assists in his rookie year.

Peters was drafted into the Canadian Armed Forces in 1942, serving as a member of the Royal Canadian Electrical and Mechanical Engineers, spending sometime overseas in the war effort. While in the Army, Peters played for the Montreal Army Hockey team, and the Kingston Army team.

When Peters returned from Europe after the war, he learned the Montreal Canadiens had claimed his playing rights on June 14, 1945. Peters would then get his first NHL action, playing for the Canadiens in the 1945-46 season, and helped them win the 1946 Stanley Cup championship, scoring 3 goals, 1 assist in the playoffs.

Peters helped the Canadiens reach the 1947 Stanley Cup finals, losing to the Maple Leafs, and after a slow start to the 1947-48 season, was traded to the Boston Bruins with John Quilty for Joe Carveth, December 16, 1947.

Peters played in Boston for 1 1/2 seasons, helping the Bruins reach the playoffs both years.

Peters was then traded to the traded to Detroit Red Wings with Pete Babando, Clare Martin and Lloyd Durham for Bill Quakenbush and Pete Horeck, August 16, 1949.

In Detroit, Peters would assist on the tying goal in game 7 of the 1950 Stanley Cup finals, allowing his teammate Pete Babando to score the championship goal in double overtime.

Peters played in Detroit for another season, before he was traded to the Chicago Black Hawks with George Gee, Clare Martin, Rags Raglan, Max McNab and Jim McFadden for $75,000 and future considerations (Hugh Coflin, October, 1951), August 20, 1951.

While playing in Chicago, Peters would have a NHL career year in points during the 1952-53 season, scoring 22 goals, 41 points, helping the Black Hawks reach the semi-finals during the playoffs.

Peters was then traded back to Detroit for future considerations, January 25, 1954, where he would finish his NHL career with the 1954 Stanley Cup championship.

Peters played for 2 more seasons with the senior Windsor Bulldogs in the Ontario Hockey association / OHA, helping them reach the OHA Senior league's final in 1955.

Peters returned to Detroit, and was a founding member of the Detroit Red Wings Alumni Association in 1959.