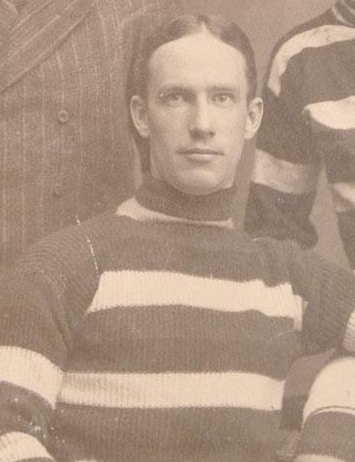 Ernest Harvey Pulford (April 22, 1875 – October 31, 1940) was a Canadian Amateur Ice Hockey Player who also won National Championships in Lacrosse, Football, Boxing, Paddling and Rowing - Born in Toronto, Harvey Pulford moved to Ottawa at an early age. Pulford joined the Ottawa Hockey Club in 1893, playing as a defenceman. In his first season, Pulford played in the first Stanley Cup playoff games, against the Montreal Hockey Club. Pulford played for Ottawa until 1908, the year that Ottawa became professional. In 1901 he altered his style of play from merely flipping the puck out of his own end to carrying the puck up the ice toward the opposing team's net. Pulford was captain of the Ottawa Hockey Club during the "Ottawa Silver Seven" era when the club won the Stanley Cup in March 1903 and held it until March 1906 - Ottawa's first Stanley Cup came at the expense of the Montreal Victorias in a two-game series in March 1903 and the triumph was highlighted by an 8-0 rout in the decisive contest. A few days later Pulford's crew successfully fended off the challenge of the Rat Portage (later Kenora) club of northwestern Ontario. In December the same year they overcame the Winnipeg Rowing Club in a battle that lasted three games. Not known for his scoring touch, Pulford contributed a goal in Ottawa's successful defense of the Stanley Cup against the Toronto Marlboros of the OHA in February 1904. A month later they weathered the challenge of Brandon, the Manitoba champions, in a rugged two-game set -

The 1905 season brought the Ottawa club the championship of the FAHL. In January of that year they suppressed the Cup ambitions of the Dawson City squad by an aggregate score of 32-4. Two months later, in one of Pulford's greatest performances, Ottawa survived a clash with the highly skilled Rat Portage outfit. The challengers from Ontario's northwest dominated the opening match, but Ottawa equalized two days later to set the stage for a memorable deciding game. Pulford, who was instructed to throw his weight around throughout the contest, was superb against the speedy Rat Portage forwards in a 5-4 Ottawa victory. A year later came his last two successful Cup defenses against Queen's University and Smiths Falls - After retirement from playing, Pulford continued in the game as a referee - Harvey Pulford was one of the original players inducted into the Hockey Hall of Fame at its founding in 1945