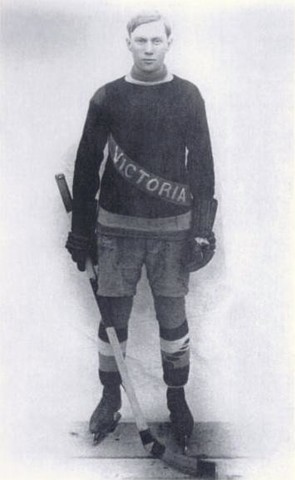 Tommy Dunderdale of the Victoria Aristocrats is credited with scoring the first penalty shot goal in Hockey history.

The first goal was scored on December 12, 1921 by Dunderdale on Hugh Lehman of the Vancouver Millionaires at Denman Arena in Vancouver, BC.

The shot was taken from one of three dots painted on the ice 35 feet (11 m) from the goal.
Players had to skate to the dot and shoot the puck from the dot.

The Victoria Aristocrats won the game 2 to 0.

PENALTY SHOT HISTORY
The penalty shot was invented in the Pacific Coast Hockey Association in the 1921–22 PCHA season. League president Frank Patrick was fed up with deliberate fouls on players with good scoring opportunities and introduced the free shot (Penalty Shot).

The first shot was taken by Jack Walker of the Seattle Metropolitans on December 5, 1921 at Denman Arena against Hugh Lehman of the Vancouver Millionaires, and the first goal was scored on December 12, 1921 by Tom Dunderdale on Hugh Lehman.

The penalty shot was added to the rule books of the National Hockey League for the 1934–35 season, allowing them to be awarded when a player was fouled while in "a good scoring position."
In the first season, the puck was placed in a 10 feet (3.0 m) circle, 38 feet (12 m) from the goalmouth. The player could shoot while stationary within the circle, or could shoot while moving, as long as the shot was taken within the circle. The goaltender had to be stationary until the puck was shot, and no more than 1 foot (0.30 m) in front of the goal mouth.

The first NHL penalty shot was awarded to the Montreal Canadiens' Armand Mondou on November 10, 1934; he was stopped by the Toronto Maple Leafs' George Hainsworth.

On November 13, 1934 Ralph "Scotty" Bowman of the St. Louis Eagles scored the first penalty shot goal in NHL history against Alex Connell of the Montreal Maroons.

Erik Cole of the Carolina Hurricanes became the first NHL player to attempt two penalty shots in one game against Martin Biron and the Buffalo Sabres on November 9, 2005, scoring once. In the Hurricanes' next game Cole was given another penalty shot but missed the net guarded by the Florida Panthers' Roberto Luongo.
Cole and Esa Pirnes (October 10 and October 12, 2003) are the only players in the NHL to have taken penalty shots in consecutive games.

Twice has a NHL team successfully converted on two penalty shots in a single game - first on February 11, 1982 when Thomas Gradin and Ivan Hlinka of the Vancouver Canucks scored on shots against Detroit Red Wings goaltender Gilles Gilbert, and on December 30, 2009 when Ryane Clowe and Joe Thornton of the San Jose Sharks converted penalty shots against Washington Capitals goalie Michal Neuvirth.
Since then, in Stanley Cup play, 46 penalty shots have been called, and only ten in the Final since the first one in NHL play in 1937. The first eight resulted in no score.

The first successful penalty shot in NHL Stanley Cup Final history occurred on June 5, 2006, when Chris Pronger of the Edmonton Oilers beat Cam Ward of the Hurricanes, following an illegal covering of the puck by Carolina's Niclas Wallin.

As of 2010, the most recent failed attempt occurred in the 2007 Final, when Antoine Vermette of the Ottawa Senators had his shot turned aside by Jean-Sébastien Giguère of the Anaheim Ducks.

For possibly the first time in professional Hockey, a player was awarded two penalty shots on the same play. This occurred on Friday, November 27, 2009 in a game from the ECHL league between the Utah Grizzlies and the Alaska Aces. Vladimir Nikiforov of the Utah Grizzlies was pulled down from behind on a breakaway and as the play continued the opposing team knocked the net off of its moorings intentionally. Once the referee stopped play he awarded Nikiforov two shots, with the second being negated if a goal was scored, however the goaltender, Scott Reid stopped both shots.