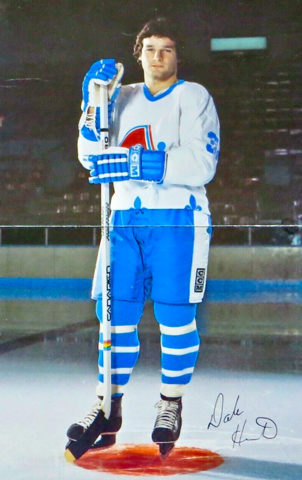 Hunter was a good goal scorer in his junior days with the Kitchener Rangers and Sudbury Wolves, also playing a tough game, always over a 100 minutes in penalties per season.

The Quebec Nordiques drafted him 41st in 1979 and one year later he made his NHL debut on October 9, 1980 vs Calgary Flames at the Stampede Corral in a 5-5 tie. Hunter had 2 assists in the game, which was the very 1st NHL game in Calgary.

Hunter scored his 1st NHL goal vs Richard Brodeur of the Vancouver Canucks on October 29, 1980 at 19:45 of the 3rd period at Colisée de Québec in a 3-3 tie. His goal tied the game.

Hunter's hard nosed style of playing and consistent goal scoring thrilled the Nordiques fans and he was soon a fan favourite. After 6 full seasons in Quebec City, Hunter was dealing with broken leg during the 1986-87 season, which affected his point totals, and at season end, he was traded to the Washington Capitals along with Clint Malarchuk in return for two players and a 1987 first-round draft pick the Nordiques then used to select Joe Sakic.

Hunter’s finest season offensively in Quebec was the 1983-84 season when he scored 24 goals, 55 assists (79 points) in 77 games. This would be the only season in Hunter’s career in which he scored more than a point per game.

Hunter opened the 1987-88 NHL season with 1 assist and a roughing penalty at Boston Garden vs the Bruins, and 2 days later made his home debut as a Washington Capitol, assisting on 2 goals, had 2 roughing and 1 high sticking penalties and served notice to everyone in Capitol Arena (USAir Arena)....there was a new sheriff in town. Caps won the game 6-4.

Just like in Quebec City, the Washington fans had a new favourite player, and Hunter didn't disappoint scoring 22 goals, 37 assists and a whopping 240 penalty minutes on a team that was the least penalized in the NHL that season. He also led the team in goals with 7 during the 1988 NHL playoffs.

Hunter never surpassed that 240 penalty minutes, but during the 1993 NHL playoffs, he added to his notoriety when late in the deciding Game 6 of the 1993 Patrick Division Semifinals between the Capitals and New York Islanders, Pierre Turgeon stole the puck from Hunter and scored, putting the game out of reach. Hunter, who was trailing Turgeon on the play, checked Turgeon from behind well after the goal as he started to celebrate. Turgeon sustained a separated shoulder and concussion from the hit, causing him to miss all but Game 7 against the Pittsburgh Penguins in the second round, as well as most of the series against the Montreal Canadiens in the conference finals. New NHL Commissioner Gary Bettman, who had earlier promised to crack down on violence, suspended Hunter for the first 21 games of the 1993-94 season.......at the time, the longest suspension in league history for an on-ice incident (in terms of games missed). Although at the time he claimed that he had not realized Turgeon had scored, years later Hunter finally admitted that he'd gone too far. Many Hockey fans consider his hit on Turgeon to be one of the worst cheap-shots in NHL history.

When Hunter broke the 1,000 points barrier (3 assists vs Philadelphia Flyers on Jan. 9, 1998), he was the NHL record holder for requiring the most games to do so by a forward, at 1,308, until Patrick Marleau achieved the feat in his 1,349th game. Hunter also was the player with the most penalty minutes when reaching that scoring milestone.

In 1998, he led the fourth-seeded Capitals to their 1st Prince of Wales Trophy championship as Eastern Conference playoffs champions and a appearance in the Stanley Cup Finals. They defeated the Boston Bruins, Ottawa Senators, and Buffalo Sabres. In the finals, the Capitals were swept by the defending Cup champions, the Detroit Red Wings.

During the 1998-99 season, Hunter had 0 goals in 50 games, and on March 23rd, Washington traded him to the Colorado Avalanche, the successor to the Nordiques, as the Washington organization gave him one final opportunity to win the Stanley Cup. He helped the Avalanche reach the Western Conference finals, losing in seven games to the eventual Stanley Cup champion Dallas Stars. Hunter retired as a player after this season.

In an April 3, 1999 game against the Edmonton Oilers, Hunter was assessed the final regular season major penalty of his career when he fought Kelly Buchberger and received five minutes for fighting.

Another NHL record for Hunter......he scored in overtime for Quebec in Game 5 of their 1982 opening round best-of-five series vs. the Montreal Canadiens, and in 1988 scoring against Ron Hextall on a breakaway in overtime for Washington in Game 7 of their opening round best-of-7 series vs. the Philadelphia Flyers, making him the first player in NHL history to score two overtime series-clinching goals in the playoffs.

Hunter's jersey number 32 was retired by the Washington Capitals on March 11, 2000 at a home game vs New Jersey Devils. During the ceremony, the Capitals presented Hunter with one of the penalty boxes from the Capital Centre (the Capitals former home arena), symbolic of his exceptional amount of time served for penalties........ 2,002 minutes while playing for Washington.

Hunter and his brother, Mark, along with Rob Ramage and Basil McRae, bought the London Knights of the Ontario Hockey League in the spring of 2000 for $3.8 million. The Hunter brothers have 95% ownership.

Hunter stepped down from coaching the Knights at the start of the 2011-12 season to take the same position with the Washington Capitals, succeeding Bruce Boudreau. He resigned from the Capitols after 1 season, in which he got them into the NHL playoffs and two 7 game series. Hunter returned to his position with the London Knights.

On May 14, 2019, Hockey Canada named Hunter as the Head Coach for Canada’s National Junior Team at the 2020 IIHF World Junior Championship. Hunter guided the team to the gold medal with a dramatic come-from-behind victory over Russia in the final game.

Hunter's coaching with the Knights has had it's controversy too, as he has been suspended by the OHL 3 times, twice for abuse and criticizing of game officials, and once for allowing a player to leave the bench to become involved in an altercation.