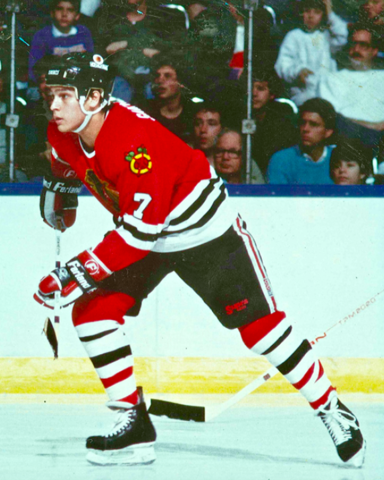 The closest organized Hockey for Sanipass was up the Richibucto River from his home in Elsipogtog First Nation to the town of Richibucto.

Sanipass then played for the Moncton Flyers U18 AAA team, scoring 43 goals (26 assists) in 1983-84 season, which got the Verdun Jr. Canadiens interested in his play.

Sanipass joined Verdun for the 1984-85 Quebec Major Junior Hockey League / QMJHL season, scoring just 8 goals in 38 games during the regular season, then had 2 goals (5 assists) helping the Jr. Canadiens with the QMJHL championship, defeating the Hull Olympiques, Shawinigan Cataractes and the Chicoutimi Sagueneens to gain a berth in the 4 team Memorial Cup tournament. He scored 1 goal in 2 Memorial Cup games.

Sanipass had a strong season for Verdun the next year, scoring 28 goals (66 assists) in 67 QMJHL games. He was drafted by the Chicago Blackhawks in the 1st round (14th overall) at the 1986 NHL draft.

Sanipass played another season in the QMJHL, for both Verdun and the Granby Bisons. He actually started the 1986-87 season with the NHL Blackhawks, making his NHL debut on October, 11, 1986 vs Steve Yzerman and the Detroit Red Wings at Joe Lewis Arena. Sanipass played on Oct 12 too vs the Penguins, but was then sent back to Verdun.

Sanipass got another call-up to the Blackhawks in late January, playing his 3rd NHL game, Sanipass made a good impression, scoring his 1st NHL goal 0n January 28, 1987 vs Ken Wregget of the Toronto Maple Leafs at Chicago Stadium. He also had 1 assist in the game. Sanipass played 4 more games in February before being sent back up to the QMHJL, finishing the season with the Granby Bisons.

The Mi’kmaw athlete also represented Canada at the 1987 IIHF World Junior Championship in Czechoslovakia. Known as the Punch-up in Piestany, as one of the most infamous incidents in WJC history occurred in 1987 in Piestany, Czechoslovakia (now part of Slovakia), where a bench-clearing brawl occurred between Canada and the Soviet Union. It began when the Soviet Union's Pavel Kostichkin took a two-handed slash at Canadian player Theoren Fleury. The Soviet Union's Evgeny Davydov then came off the bench, eventually leading to both benches emptying. The officials, unable to break up the numerous fights, left the ice and eventually tried shutting off the arena lights, but the brawl lasted for 20 minutes before the IIHF declared the game null and void. When the lights went back on, the Canadian team had clearly defeated the Russian players at more then just Hockey.

A 35-minute emergency meeting was held, resulting in the delegates voting 7–1 (the sole dissenter was Canadian Dennis McDonald) to eject both teams from the tournament.

Sanipass then played for the Blackhawks until the 1989-90 season, when they traded him to the Quebec Nordiques. He also played 23 games for the Saginaw Hawks during the 1988-89 International Hockey League / IHL season and 30 games for the Indianapolis Ice in the 1989-90 IHL season.

Sanipass finished his pro Hockey career with the Halifax Citadels of the American Hockey League / AHL, playing until 1993.

Everett Sanipass was inducted into the New Brunswick Sports Hall of Fame in 2015. The 1st Native Canadian to do so.