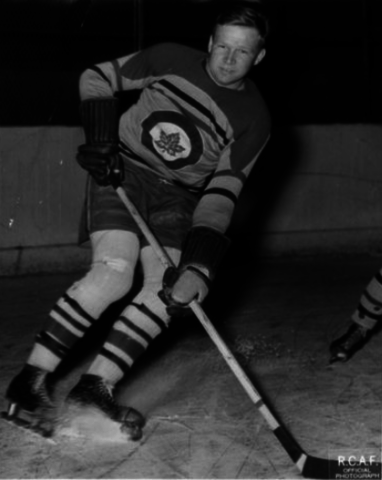 Blade then joined the Ottawa RCAF Flyers for the 1941-42 season, scoring 7 goals in 16 games, and played in 2 playoff games, helping the RCAF Flyers win the 1942 Allan Cup championship. Blade got to play with the legendary Kraut Line of the Boston Bruins who were on the RCAF Flyers team. Midway through the 1942-43 Hockey season, Blade was transferred to Vancouver, B.C. where he picked up his game with the Vancouver RCAF

Blade returned to Ottawa the next season, and played in the Ottawa City Hockey League / OCHL with both the Ottawa Senators and Ottawa Depot #17.

Blade joined the United States Hockey League / USHL Kansas City Pla-Mors for the 1945-46 season, scoring 29 goals, 65 points to lead the team in scoring during regular season where the Pla-Mors were awarded the Directors Cup as regular season champs, and then Blade scored 7 goals, 8 assists in the playoffs leading his team to the Paul W. Loudon Trophy as 1946 USHL champions.

The Chicago Black Hawks took notice of Blades scoring, and signed him a NHL contract. Blade played in 16 games during the 1946-47 season, scoring just 1 goal, 3 assists. Blade finished the season with the Kansas City Pla-Mors, and helped the team win another Paul W. Loudon Trophy as 1947 USHL champions.

Blade played with the Kansas City Pla-Mors until 1950, and did get in 6 more NHL games with the Black Hawks early in the 1947-48 season.

Blade then jumped teams in the USHL, playing with the Milwaukee Seagulls during the 1950-51 season, leading the league in scoring with 26 goals, 48 assists, and was awarded the Herman W. Paterson Cup as league MVP in 1951.

Blade finished his Hockey career as a player / coach with the Calgary Stampeders of the PCHL / WHL from 1951 to 1953.