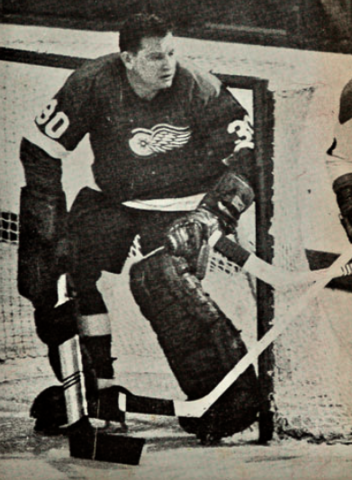 Bassen played all his minor and junior Hockey in his hometown of Calgary, playing junior with the Calgary Buffaloes from 1950 to 1953. Bassen played his final season of amateur Hockey with the OHA Sr. Chatham Maroons in the 1953-54 season, before turning pro with the American Hockey League / AHL Buffalo Bisons in 1954.

While playing for Buffalo, Bassen made his NHL debut for the Chicago Black Hawks on December 19, 1954 vs Boston Bruins at Chicago Stadium in a 6-1 Chicago win......his 1st NHL victory.

Bassen was back playing in Buffalo the next season, when Chicago called him back up for a game on January 4th.......9 days later he had his 1st NHL shutout on January 12, 1956 vs Boston Bruins at Boston Garden in a 5-0 Chicago win.

Bassen then went on to have starting roles in the Western Hockey League / WHL from 1956 to 1960 with the Calgary Stampeders, Seattle Americans and the Vancouver Canucks, winning the George Leader Cup as the WHL Most Valuable Player while playing with the Canucks in 1959-60 season.

Chicago traded Bessen with Johnny Wilson, Forbes Kennedy and Bill Preston for Ted Lindsay and Glenn Hall, July 23, 1957 to the Detroit Red Wings where over three seasons he would serve as back-up to Terry Sawchuk between 1960 and 1963. Bassen was in goal the night Chicago beat Detroit 5-1 to capture the Stanley Cup in the sixth game of the finals in 1960-61.

After playing the 1964-65 season with the Pittsburgh Hornets, Bassen returned to the Red Wings roster to serve back-up once more, this time to Roger Crozier during the 1965-66 NHL season. He played in game 4 of the 1966 Stanley Cup finals in relief of Crozier, as the Montreal Canadiens won the series 4-2.

Bassen split the next season between the Hornets and Red Wings, before he played one final year with the Pittsburgh Penguins, backing up Les Binkley before retiring in 1968.

He later got into coaching after his playing days.

Thank you for shining the spotlight on Bassen. Nice article!