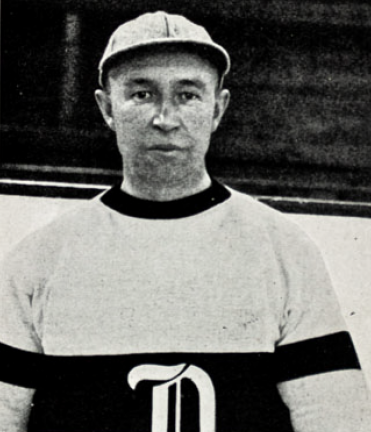 Holmes was the lacrosse goaltender for the 1st Mann Cup champions in 1910 with the Young Toronto Lacrosse Club.

Holmes was the 1st professional Hockey goaltender in Toronto, Ontario, playing for the Torontos / Toronto Blueshirts (Toronto Hockey Club) in the National Hockey Association / NHA, making his debut at the Arena Gardens on December 25, 1912 vs the Montreal Canadiens in a 9-5 Montreal win.

Holmes later made his NHL debut with the Toronto Arenas on January 9, 1918 vs the Montreal Canadiens at Arena Gardens in a 6-4 Toronto win.

The American Hockey League / AHL named their award for the top goaltender, the Hap Holmes Memorial Award, after him and was first presented after the 1947-48 season.

Harold “Hap” Holmes was inducted into the Inaugural class of the Aurora Sports Hall of Fame 2013.