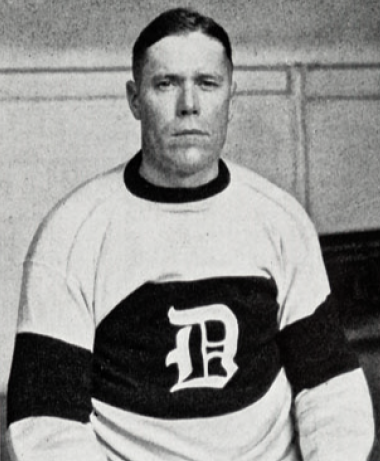 Fredrickson made his NHL debut with the Detroit Cougars on November 18, 1926 vs the Boston Bruins at Border Cities Arena in 2-0 Bruins win.

Fredrickson scored his 1st NHL goal vs Hugh Lehman of the Chicago Black Hawks on November 24, 1926 at 15:00 of the 3rd period at Chicago Coliseum in a 1-0 Detroit win. His goal was the game winner, also being the winning goal of the 1st NHL victory for a Detroit team.

Frank Fredrickson was inducted into the Hockey Hall of Fame in 1958.

Frank Fredrickson was inducted into the Manitoba Sports Hall of Fame and Museum in 1981.

NOTE
While at Princeton University coaching the Hockey team, Fredrickson befriended Albert Einstein, who was working as a professor there; the two shared an interest in the violin.