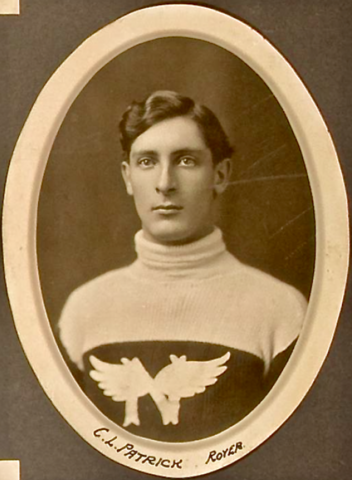 Co-Founder of the Pacific Coast Hockey Association / PCHA in 1911, and the first game of the PCHA was played on January 3, 1912.

The Patricks introduced numerous innovations to the sport of ice Hockey.....including blue lines, goal creases, forward passing, penalty shots, playoffs, removed the rule that goaltenders must stay on their feet and instituted the use of jersey numbers in ice Hockey, possibly all sports, so patrons of the early games could associate jersey numbers to players names printed in programs.

Lester Patrick was inducted into the Hockey Hall of Fame in 1947........as one of the first 42 inductees of the 'Kingston-era' Hockey Hall of Fame (1945, 1947, 1950, 1952), then situated in Kingston, Ontario. Captain James T. Sutherland actually traveled to Madison Square Garden to present Lester Patrick with a formal induction scroll on December 3, 1947 home game vs Toronto Maple Leafs

Lester Patrick was inducted into the B.C. Sports Hall of Fame in 1966

The championship trophy of the Western Hockey League, the President's Cup, was renamed the Lester Patrick Cup after Patrick upon his death in 1960.

The Lester Patrick Trophy, awarded for outstanding contributions to Hockey in the United States, is named for him. First awarded 1966.

The Patrick Division is a former division of the National Hockey League / NHL from 1974 to 1993. It was named in honor of Lester Patrick.

Lester Patrick was inducted into the Canadian Sports Hall of Fame in 1975.

The Patricks have been dubbed "Hockey's Royal Family." Lester himself was the father of Lynn Patrick and the grandfather of Craig Patrick, both of whom are themselves Honoured Members of the Hockey Hall of Fame. Another son, Muzz Patrick, was a star player and eventually coach and general manager of the Rangers. Lester's grandson Glenn Patrick played in the NHL during parts of the 1970s while another grandson, Dick Patrick (Muzz's son) has been president of the Washington Capitals since 1982 (he is also a minority owner).

NOTE
Patrick mostly played as a defnceman, but also would play in goal when needed, and twice during Stanley Cup play, he put on the pads......on March 9, 1904 while playing with Brandon vs Ottawa Silver Seven and his most famous game on April 7, 1928 with New York Rangers vs Montreal Maroons. He also played goal in emergency for Montreal Wanderers and Victoria Aristocrats.