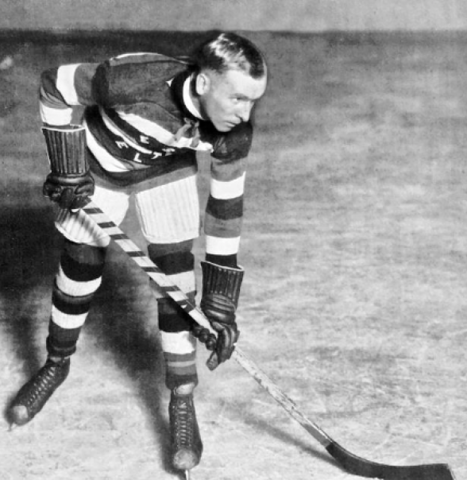 Foyston then joined the Eaton Athletic Association in the senior OHA for 1911-12 season. The "Toronto Eatonias" (Toronto Eatons) played in the Toronto Metro Hockey League. Foyston helped the Eatonias win the OHA 1911-12 senior championship, and being awarded the J. Ross Robertson Trophy. The Eaton's also played a 2 game Allan Cup challenge , losing to the Winnipeg Victorias in the spring of 1912. Foyston scored 15 goals for the Eaton's team during the regular season and 5 goals in 4 playoff games.

Foyston soon formed a potent forward line with the talented Scotty Davidson and Jack Walker on the Blueshirts, scoring 16 goals during the 1913-14 season, and 1 goal in 2 playoff games to help the Blueshirts win the 1914 O'Brien Trophy as NHA champions. Then in the 1914 Stanley Cup championship series vs the Victoria Cougars, Foyston scored two goals, including the decisive goal in the 2-1 Cup-clinching victory.

Foyston was a big reason why the Metropolitans reached the 1919 Stanley Cup finals. During the regular season, Foyston only scored 15 goals in 18 games, but once the 1919 playoffs started, Foyston picked up his game, scoring 3 goals in 2 PCHA playoff games, helping them win the championship, and then the crafty forward scored an incredible 9 goals (4 assists) in a rematch with the Canadiens in the Stanley Cup championship series. Foyston had a hat-trick (3 goals) in game 1, 1 goal in game 2 , 4 goals in game 3 and 1 goal in game 5. Game 4 was a 0-0 tie.

The following season, in 1919–20, Foyston scored 26 goals in 22 regular season games for Seattle and 3 goals in 2 playoff games in the PCHA final, as Seattle advanced to the 1920 Stanley Cup Finals vs the Ottawa Senators. In the Finals, the first 3 games were played at Mutual Street Arena, and the puck was dropped for the first game of the series by Stanley Cup trustee William Foran to the centres Frank Nighbor and Frank Foyston, both of whom scored 2 goals each in the game. Ottawa won the best of 5 series 3-2, with Foyston scoring 6 goals, 1 assist during the 5 games.