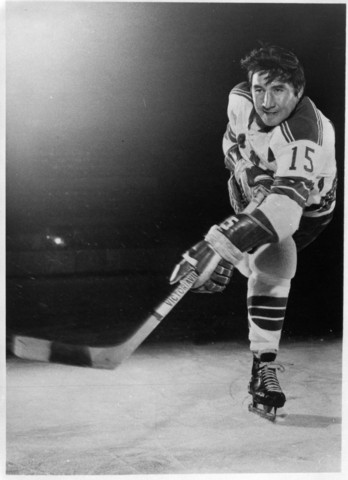 Neilson was a mix of Danish and Cree and grew up in the St. Patrick’s Orphanage / Residential School where he was educated and played Hockey. He excelled for three years with the Prince Albert Mintos of the SJHL where he registered consecutive 20-goal seasons in 1960 and 1961. The New York Rangers prospect enjoyed a solid first pro season in the EPHL with the Kitchener-Waterloo Beavers in 1961-62.

Neilson made his NHL debut with Rangers on October 11, 1962 vs Detroit Red Wings in a 2-1 Detroit win at Madison Square Garden.

Neilson looked solid as a rookie paired with Doug Harvey in 1962-63 and became a fixture on the New York defence for a dozen seasons. In 1967-68 he played superior defence and scored 35 points. "Chief" scored a career-high ten goals and 44 points the next year then helped the Blueshirts become one of the league's elite clubs. In 1968-69, he was paired with rookie Brad Park and was credited with making a huge difference in the youngster's game.

Jim Neilson was inducted into the Saskatchewan Sports Hall of Fame in 2018.