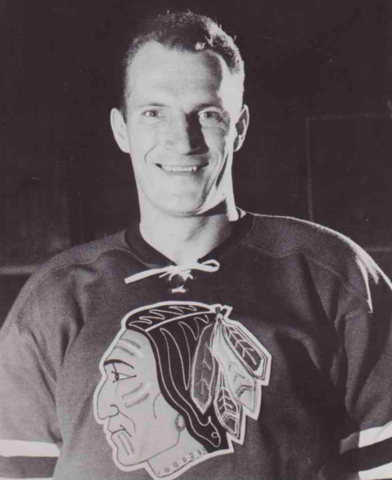 Rollins then played with the 1946-47 Vancouver Canucks in the PCHL. Next year, Rollins at age 21, moved to Edmonton to play for the Edmonton Flyers. Rollins believed the Flyers were a team capable of capturing the Allan Cup and he also believed if he played well enough he might get signed into the NHL. Rollins' gamble paid off and the Edmonton Flyers won the 1948 Allan Cup championship. He played 24 games that season, winning 20 and posting a 1.93 GAA.

Rollins then played 1 season with Kansas City Pla-Mors in the United States Hockey League / USHL. He started the 1949-50 season with the Cleveland Barons in the American Hockey League / AHL, and was sent to the Pittsburgh Hornets to finish the season. Rollins did make his NHL debut with the Toronto Maple Leafs on Christmas Eve...December 24, 1949 vs Boston Bruins at Maple Leaf gardens in a 8-4 Boston win. He played 40 minutes in relief of Turk Broda.

Rollins played his 2nd NHL game on March 25, 1950 vs Boston Bruins at Maple Leaf Gardens. It was his 1st NHL victory and 1st NHL shutout in a 8-0 Toronto win.

Rumors had it that he was signed by Toronto to simply put pressure on Turk Broda to lose weight. This wasn't exactly true as the Maple Leafs also needed to shore up their rapidly thinning goaltender depth chart. Rollins played 40 games for the Maple Leafs during the 1950-51 season, with 27 wins and 8 ties. He played 4 playoff games, including 3 straight OT victories vs Montreal Canadiens to win the 1951 Stanley Cup championship.

Rollins was awarded the 1951 Vezina Trophy.

Rollins played every game for Toronto during the 1951-52 season, then was traded to the Chicago Black Hawks for veteran Harry Lumley.

Rollins played for the Black Hawks for 5 seasons, a team that usually finished last in the NHL, which majorly contributed to his 141-205-83 record. But despite that, Hockey pundits saw Rollins as one of the league's best goaltenders and in 1953-54 he played in the NHL All-Star Game and was awarded the Hart Trophy, even though he only won 12 games and lost 47 that season.

Rollins is, as of 2022, one of the three eligible players (others are Eric Lindros and Tommy Anderson) to win the Hart Memorial Trophy and not be elected to the Hockey Hall of Fame.

Rollins would stay in the minor leagues until 1960, when he was signed on by the New York Rangers. He played 10 NHL games before they sent him back to the minor leagues again (Portland Buckaroos). This would mark the end of his NHL career. His final season as a pro was with Portland in the Western Hockey League / WHL in 1961-62.

In 1965, Rollins was playing for the Drumheller Miners in the Alberta Senior Hockey League. He later won 12 playoff games, as Drumheller won the 1966 Allan Cup championship.

After retiring he opted to become a coach. Rollins coached the University of Calgary Hockey team as well as clubs in Spokane, Salt Lake City, Houston, Tulsa and Phoenix. As a coach, he achieved a good measure of success, including an Allan Cup championship with the Spokane Jets in 1970.

Rollins was named coach of the WHA Phoenix Roadrunners in 1976, replacing local favourite Sandy Hucul. Rollins was generally hated in Phoenix after his years as coach of the WHL rival Salt Lake Golden Eagles, and his tenure in Phoenix resulted in the demise of the Roadrunner franchise after only one season at the helm.

Elwin “Al” Rollins was inducted into the Saskatchewan Sports Hall of Fame in 1999.