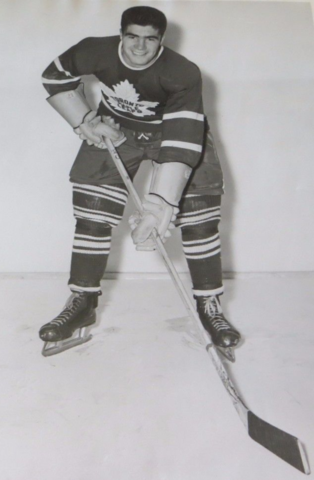 Mackell grew up in Montreal playing Hockey, where he got his first taste of junior Hockey, playing for the Montreal Jr. Royals in 1945.

Mackell would enjoy his finest junior Hockey season in 1946-47, where he scored a team high 49 goals and 33 assists in 28 games, and then scored 15 goals and 14 assists leading his team to the Memorial Cup championship in 1947.

Mackell then signed with the Toronto Maple Leafs, but started his pro career with their farm team, the Pittsburgh Hornets. The Maple Leafs did call up Mackell for 3 games during the season to give him his first taste of NHL Hockey. The next season Mackell played the majority of the Hockey season with the Hornets, but was called up to the Maple Leafs late in the season, and helped the Maple Leafs win the 1949 Stanley Cup, posting 2 goals and 4 assists in 9 playoff games.

Mackell was traded to the Boston Bruins midway through the next season in return for young Defenseman Jim Morrison. In Boston, he attained NHL First All Star Team status for the 1952-53 season, at the position of center, playing on a line composed of Ed Sanford and Johnny Peirson. Mackell also won the Elizabeth C. Dufresne Trophy in 1953, awarded annually to the outstanding Bruins player on Boston Gardens home ice.

Mackell was named an alternate captain of the Boston Bruins in 1955. Mackell became a mainstay and catalyst of Boston's strong and prolific offense of the late 1950s. In 1956-57, he centered a line composed of veteran iron man Cal Gardner and Rookie of the year, Calder trophy winner Larry Regan. Along with later Bruins` linemate, Don McKenney, Fleming Mackell led all scorers during the epic 1957-58 Stanley Cup playoffs, where the Bruins lost to the Canadiens in the championship series.

In the spring of 1959, Fleming Mackell led the Boston Bruins against the New York Rangers on an exhibition tour of Europe. A rugged, hard charging playmaker with a razor sharp skating style, he was a side of the net scoring specialist. The versatile Flem MacKell frequently played at left wing, principally with Don McKenney and Jerry Toppazzini, a trio whose production matched the output of the vaunted UKE Line, along with his regular position at centre. MacKell often assumed a defensive checking role, he was the catalyst of the short lived Hustle line in 1959-60.

Upon his retirement from the Boston Bruins & the NHL at the conclusion of the 1959-60 season, Fleming MacKell briefly became Player/Coach for the Quebec Aces of the AHL in 1960-61. He approached the Detroit Red Wings for a tryout in September 1961 and appeared in some exhibition games, but did not make the club.

Mackell played out his Hockey career over the next few years with the Los Angeles Blades, New Glasgow Rangers, St. Hyacinthe Saints and St. John's Capitals.

Fleming Mackell, and his father Jack Mackell, are one of the few Father-Son Stanley Cup champions. Jack won Stanley Cups with the Ottawa Senators in the 1920s.