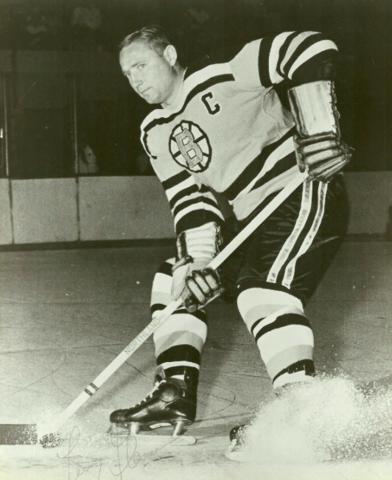 Flaman played with a variety of Regina minor Hockey teams, then at age 15 years old, he joined the Regina Abbotts of the Southern Saskatchewan Junior Hockey League. While playing for the Abbots, Flaman was signed as protected player by the Boston Bruins and sent to play for the New Haven Crescents / Brooklyn Crescents in the Eastern Amateur Hockey League / EAHL to start the 1943-44 season.

Do to the War, the Eastern Amateur Hockey League / EAHL had NHL players in the league, and at age 16, Flaman was playing against men. He did very well, scoring 5 goals, 9 assists in 11 games which caught the attention of the Bruins main farm team, the Boston Olympics, where he would finish the season, scoring 12 goals, 7 assists in 32 games, and another 2 goals, 12 assists in 12 playoff games, helping the Olympics win the 1944 Atlantic City Boardwalk Trophy as league champions and the Walker Cup as EAHL playoff champions.

Flaman played for the Olympics for another 2 seasons, helping them win the EAHL championship in both 1945 and 1946, along with the Boardwalk Challenge Trophy and Walker Cup.
He was also named to the EAHL's First All-Star Team in 1945 and 1946. while playing for the Olympics, Flaman made his NHL debut on February 25, 1945 vs the New York Rangers at Madison Square Garden in a 4-4 tie. He played another game on January 6, 1946 - both vs the New York Rangers.

Flaman jumped to the American Hockey League for the 1946-47 season, anchoring the defence on the Hershey Bears, Boston's affiliate in that league. Flaman played 38 games for the Bears, scoring 4 goals, 8 assists when the Bruins brought him up to the NHL to finish the season. Flaman scored his 1st NHL goal vs Turk Broda of the Toronto Maple Leafs on February 8, 1947 at 8:35 of the 3rd period at Maple Leaf Gardens in a 5-2 Toronto win.

Flaman played the next 3 full seasons with the Bruins, helping them reach the playoffs in 1948 and 1949.

Flaman started the 1950-51 season with the Bruins, but was traded to the Toronto Maple Leafs in November 1950 along with Leo Boivin, Phil Maloney and Ken Smith for Bill Ezinicki and Vic Lynn. Flaman fitted in with his new club and became renowned for his hitting. Later that spring, he played an integral role on the blue line when Toronto won the 1951 Stanley Cup on Bill Barilko's dramatic overtime goal against Montreal. Flaman was Barilko's defence partner.

Fern played three more seasons for Toronto, but during the summer of 1954, Maple Leafs owner Conn Smythe asked Flaman if he would like to be traded back to Boston. "That was awfully nice of him, being that my wife was from Boston and my home was there," Fern said. "I respected Smythe for letting me know in advance where things stood. You don't find many people in sports as decent as he was to me."

He was traded back to Boston in exchange for Dave Creighton prior to the 1954-55 season, where he went on to play the best Hockey of his career. Flaman led the league with 150 penalty minutes that season and was named to the NHL's Second All-Star Team. "The homecoming was great. I was named assistant captain and played under Milt Schmidt, who had been my teammate in the previous run with the Bruins."

In 1955-56, Flaman was named captain of the Bruins, replacing Schmidt. He wore the 'C' for the remainder of his NHL career. His leadership was most notable in blocking shots, clearing the front of the net and, when required, throwing punches with the league's heavyweights. When a teammate was in trouble, the captain was always there to confront the perpetrator.

In 1956-57 and 1957-58, the Bruins went to the Stanley Cup final, only to be defeated by the Montreal Canadiens, who were in the midst of a five-year dynasty. In both seasons, Fern was a finalist for the Norris Trophy as the NHL's premier defenceman and he was named to the NHL's Second All-Star Team. In all, he played in five All-Star contests.

During the late-1950's, Flaman was recruited by Ted Lindsay and Doug Harvey to initiate a players' association. While that effort was eventually scuttled, it was the precursor the National Hockey League Players' Association that was formed in 1967.

During the 1958-59 season, the Bruins staged a 'Fern Flaman Night.' "They presented me with a car and many other gifts," he later stated. "Getting the respect of the Boston fans and the night was a highlight of my career."

Fern Flaman played a tough game. "Of the guys I played against, Gordie Howe was the toughest," stated Fern. "We didn't fight because we had a mutual respect for one another, but we both played it hard. I'm sure I received a few nicks from him, and I gave him a few too."

Gordie Howe had equal respect for Fern Flaman. "He's the toughest defenceman I ever played against."

In 1961, Flaman was named the player-coach-general manager of the AHL Providence Reds, retiring as an active player after the 1963–1964 season. He coached Providence for one more year after that, coaching teams in the Western Hockey League and the Central Hockey League thereafter.

In 1970, Flaman was named the head coach of the Northeastern University Huskies men's college team, and coached for nineteen seasons (the longest tenure in school history), amassing a 256–301–24 record. He was named United States college coach of the year in 1982, and led the Huskies to four Beanpot Tournament championships (1980, 1984, 1985, 1988) and a Hockey East championship in 1988. Flaman is the only Northeastern men's Hockey coach to win a Beanpot championship He retired from Northeastern the next year.

Flaman carried out the remainder of his career serving as a scout for the NHL New Jersey Devils.