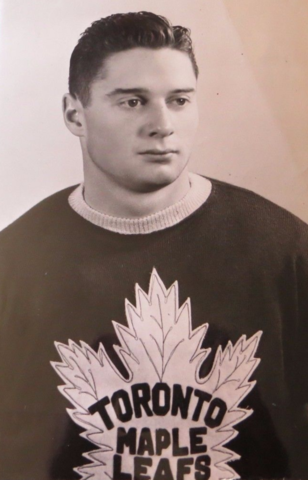 Thomson was signed by the Toronto Maple Leafs and headed to Toronto at the age of 16 to play junior Hockey with the St. Michael's Majors, a Maple Leafs affiliate in the Ontario Hockey Association. After two seasons at St. Mike's, he spent most of the 1945–46 season with the Pittsburgh Hornets in the American Hockey League before joining the Maple Leafs on a full-time basis the next year.

Thomson was regarded as one of the league's toughest foes and placed on the NHL Second All-Star team in 1951 and 1952. He also participated in seven All-Star Games and was an integral part of Stanley Cup championships in 1947, 1948, 1949 and 1951.

At the beginning of the 1956–57 season, Thomson was named team captain, succeeding veteran Sid Smith who gave up the title after his offensive production plummeted during his one season as captain the previous year. Thomson's time with the C would be brief, as it was handed back to former captain Ted Kennedy when he made a comeback after retiring at the end of the 1954–55 season.

That same season, Thomson became one of the leaders of Ted Lindsay's attempt to have a players' association formed, hoping to improve players' conditions and especially to improve player pensions. Thomson was secretary–treasurer of the association and led the organizational drive within the Maple Leafs, which resulted in every member of the team except Kennedy wanting to join the association. Thomson's activities didn't go over well with Maple Leafs' president Conn Smythe, who called him disloyal, revealed his salary dating back to junior, and took him off the team during the season. At the end of the season, Thomson announced to the press that he had played his last game for Smythe and would never play hockey for Toronto ever again. During the off-season, he was sold to the Chicago Black Hawks after twelve years with the Maple Leafs. Lindsay was also traded to Chicago at the same time.

Thomson suited up for 70 games for the Black Hawks and helped solidify the team's blueline before retiring at the end of the regular season in 1958.