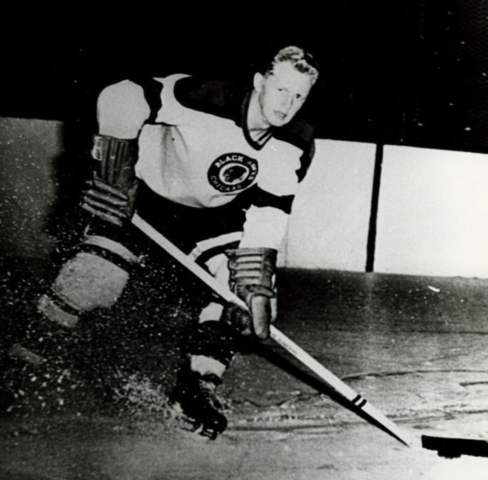 Timgren played his junior Hockey with the Toronto Young Leafs from 1943 to 1945 and then the Toronto Marlboros from 1945 to 1948. Timgren also played for the Toronto Dorsets during the 1946-47 season.

Timgren jumped to the Toronto Marlboros senior team for the 1948-49 season. Timgren made his NHL debut for the Toronto Maple Leafs in early 1949, and played with Max Bentley & Joe Klukay in Toronto on what was nicknamed "The Three Feathers" line as all 3 of them were lightweights in size and weight. Timgren scored 3 goals, 12 assists in 36 games during the regular season, and 3 goals, 3 assists in the 1949 playoffs, helping the Maple Leafs win the 1949 Stanley Cup Championship.

Timgren was nicknamed "Golden Boy" because of the color of his hair.

Timgren was a Maple Leaf full time the next season, scoring 7 goals, 18 assists during the season. The 1950-51 season saw Timgren score only 1 goal and 9 assists during the regular season and only 1 assist in 11 playoff games, as the Maple Leafs won the 1951 Stanley Cup championship.

Timgren played 50 games for the Maple Leafs in the 1951-52 season, scoring just 2 goals, 4 assists and was sent down to their farm team, the AHL Pittsburgh Hornets, where he scored 13 goals, 5 assists in the final 19 games of the season.

Timgren started the 1952-53 season with the Maple Leafs, but after getting 0 points in 12 games, was sent back to Pittsburgh, where he played for the next 2 seasons, and had a career year as a pro there, scoring 22 gaols, 30 assists for the Hornets during the 1953-54 season.

The Maple Leafs traded Timgren to the Chicago Black Hawks for Jack Price, October 4, 1954. Timgren played just 14 games for the Black Hawks before they loaned him back to the Pittsburgh Hornets in November, where he finished the season, helping the Hornets finish first overall in the regular season (12 goals, 13 assists), and then he scored 3 goals, 4 assists during the playoffs, as the Hornets won the 1955 Calder Cup championship.

Timgren started the 1955-56 season with the Hornets, but retired from Hockey after just 8 games in 1955.

After retirement, Timgren started teaching with the North York Board of Education, and in 1964 was a vice principal at Sloane Ave Public School. "Do it now!" was one of his favorite sayings and he never put off what he could now! Ray was also Principal at Mallow Road Public School in Don Mills in the late-1960s - 1970s and then at Glen Rush Public School.