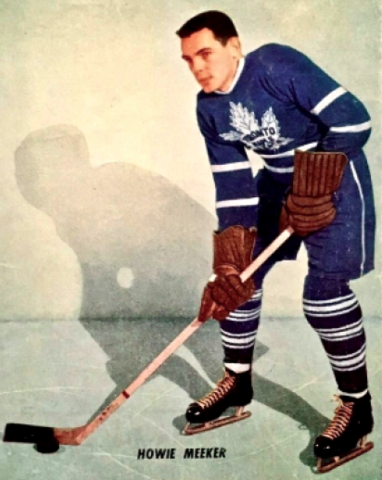 Meeker played his first junior Hockey with the Kitchener Greenshirts in the OHA Jr. B league in 1940-41. He would then join the Stratford Kist Canadians for the 1941-42 season, scoring 29 goals, 16 assists in 13 regular season games, then in the playoffs he scored 21 goals, 12 assists, leading the Kist Canadians to the 1942 Sutherland Cup championship as OHA Jr. B champions.

The Kist Canadians became the Stratford Kroehlers for the 1942-43 season, playing at the OHA Jr. A level. Meeker played just 6 games for the Kroehlers, scoring 6 goals, 4 assists. He played 4 games in the 1943 playoffs, 2 with the Kroehlers and 2 with the Brantford Lions.

Meeker tried to join the Royal Canadian Air Force, but was denied do to a heart condition. He then joined the army's Corps of Royal Canadian Engineers in 1943. He was wounded in 1944 when a live grenade exploded beneath his legs during training exercises in England, but he made a full recovery. In 1945–46, after World War II had ended, Meeker returned to the OHA and played one season with the Stratford Indians at the OHA Sr. level, scoring 8 goals, 5 assists in 7 regular season games, and 6 goals, 5 assists in 5 playoff games.

The Toronto Maple Leafs took notice of Meeker, and signed the feisty right winger for the 1946-47 season. Meeker made his NHL debut on October 16, 1946 vs the Detroit Red Wings. Three nights later, playing his 2nd NHL game, Meeker scored his 1st NHL goal vs Harry Lumley of the Red Wings. His 1st NHL goal was also the game winner in a 6-3 Toronto victory. He also scored 5 goals in a game on January 8, 1947 vs Paul Bibeault of the Chicago Black Hawks, tying a NHL record for most goals by a rookie in one game. Meeker scored 27 goals, 18 assists during his rookie season, and was awarded the 1947 Calder Memorial Trophy. He also played in the 1947 NHL All-Star Game. During the 1947 NHL playoffs, Meeker scored 3 goals, 3 assists, which included assisting on the the 1947 Stanley Cup championship goal scored by Ted Kennedy.

Meeker had a solid 1947-48 season, following his spectacular rookie season, scoring 14 goals, 20 assists during the regular season, and 2 goals, 4 assists during the playoffs, helping the Maple Leafs win the 1948 Stanley Cup championship.

Meeker sustained a collarbone injury that limited him to only 30 games during the 1948-49 season and he did not play a single game in the playoffs. The Maple Leafs won the 1949 Stanley Cup championship, and included Meeker's name when engraving on the the cup.

Meeker bounced back for the 1949-50 season, scoring 18 goals, 22 assists during the season, his second best as a pro, but only had 1 assist during the playoffs, as Toronto lost in the semi-finals to Detroit.

The 1950-51 season was very special for Meeker. He had decided to get into Federal Politics, running in the Waterloo South riding in Ontario and winning the by-election, becoming a Progressive Conservative MP. He was also playing some pretty good Hockey that season too, scoring 6 goals, 14 assists in 49 regular season games, and then in the playoffs, Meeker again assisted on the Stanley Cup winning goal, this time scored by Bill Barilko in overtime, as the Maple Leafs won the 1951 Stanley Cup championship. It would be the final NHL playoff point scored by Meeker.

Meeker turned to coaching right after retiring. He coached the Stratford Indians of the OHA Sr. for the remainder of the 1953-54 season, then jumped to the American Hockey League / AHL, coaching the Pittsburgh Hornets, who won the 1954-55 F. G. "Teddy" Oke Trophy as AHL regular season winners, and the 1955 Calder Cup championship as AHL playoff champions.

Meeker coached the Hornets for another season, before the NHL Maple Leafs hired him to coach his old team for the 1956-57 season, and then became their General Manager in 1957, but that job quickly ended following a heated exchange between Meeker and Maple Leafs’ owner Stafford Smythe. “He shoved me and I popped him between the eyes,” recalled Meeker.

He then moved to Newfoundland and Labrador in late 1957, where he quickly became involved in local Hockey, helping to create a large group of talented players. His coaching contribution had a major influence in Hockey in the province. He coached high school, junior, and senior leagues in St. John’s, including the St. John’s Capitals who won a Herder Memorial Trophy in 1970. He is remembered as “simply an excellent coach”, having a philosophy and instructional leadership that benefited many kids, as well as accomplished players. Meeker also played Hockey for a number of teams in St. John's over the years while coaching there.

A chance meeting with Hockey Night in Canada host Ted Darling in 1969 landed him a job as a colour commentator. Meeker went on to enjoy a 30-year career as a colour analyst. Much of his popularity stemmed from the enthusiasm he brought the job and his knack for telling it like it was…

“Some guys were scared to say their thoughts and skirted the subject by not saying what really happened. There was nothing ever instructive or critical” he said. “I had enough other things going that the money I got from HNIC was holiday money. It didn’t matter to me if I got fired.”

Meeker became known to a new generation of Hockey fans as the squeaky-voiced analyst on Hockey Night in Canada. He began analyzing plays in greater depth than previous colour commentators, using the telestrator to demonstrate his points. During the telestrator segments, his favorite directive was, "stop it right here", to freeze the screen in order to analyze specifics in the replay. He also worked on Vancouver Canucks telecasts on BCTV. When TSN gained NHL cable rights in 1987, Meeker joined their broadcast team, where he stayed until retiring in 1998. Meeker popularized the phrase, "Keep your stick on the ice", made during his educational segments on Hockey Night in Canada.

Meeker also ran Hockey schools as summer camps in Canada and the United States. His weekly telecasts based on these camps, Howie Meeker's Hockey School, ran from 1973 to 1977 on CBC Television. The series was produced in St. John's, Newfoundland. It featured boys learning the basic skills about the game: skating, puck control and passing. Meeker's encouragement and delivery were all based on his premise that the game was suffering from poor instruction at the junior levels. He felt the game was not being taught properly so his message was directed at coaches across Canada. He also made vocal and detailed complaints about poor quality Hockey equipment for child players, especially concerning protective gear. The television series had 107 fifteen-minute episodes. It was produced and directed by Ron Harrison and/or John Spaulding and aired weekly during the Hockey season.

His instruction and coaching continued as he wrote two books while living in Newfoundland. Howie Meeker’s Hockey Basics was published in 1973 and More Hockey Basics from Howie Meeker was published in 1975. These books were extremely influential in shaping the way Hockey is played today. His opinions on the lack of basic playing skills lead to his book creating the groundwork for how hockey was taught in the future. He recognized his time in Newfoundland with his training school as the perfect opportunity to test his theories of developing skating power from balance. His first book was selected by the Literary Review of Canada as the 63rd most important book of all time.

Meeker has been involved with Special Olympics for approximately 50 years. He was involved in launching Special Olympics Canada after being invited to participate by former NHL referee Harry "Red" Foster shortly after the Special Olympics movement was created by Eunice Kennedy Shriver in the United States. In 1988, at the age of 64, Meeker was contacted by Campbell River Special Olympics in Campbell River, B.C. to help with setting up a fundraising golf tournament for the local Special Olympics organization. He was initially serving as a go-between to get a regional sports star involved but eventually, Meeker himself lent his name and support to the Howie Meeker Charity Golf Classic at Storey Creek Golf Club. Each year for the next 30 years, Meeker participated in the successful fundraiser in person. In his 94th year and at the 30th running of the event in August 2018, it was announced that Meeker would be taking a step back and welcome a new co-host to carry on with the event. NHL player Clayton Stoner has signed on to be co-host with Meeker to ensure the fundraiser continues in his name into the future.

Howie Meeker was inducted into the Hockey Hall of Fame in 1998 as a broadcaster.

Howie Meeker was inducted into the BC Hockey Hall of Fame in 2003.

Howie Meeker was inducted into the Ontario Sports Hall of Fame in 2010.

Howie Meeker was named a Member of the Order of Canada on December 30, 2010.

Howie Meeker named to Special Olympics BC Hall of Fame in 2016.

Howie Meeker was inducted into the SportNL Hall of Fame in 2016 as a builder.