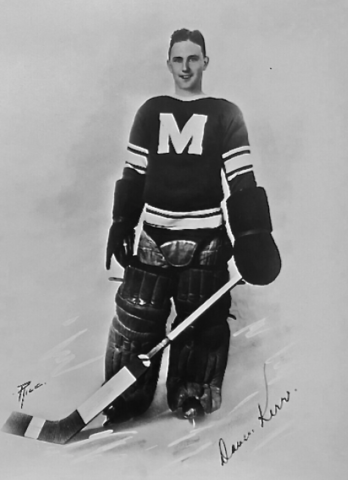 Kerr learned his Hockey at the Toronto Canoe Club, playing for their minor and junior teams in the OHA.

Kerr was signed by the Montreal Amateur Athletic Club in 1928, and and helped the Montreal A.A.A. win the 1930 Allan Cup championship, with Kerr allowing only 1 goal in the 2 game sweep of the Port Arthur Bear-Cats in the final. Kerr also played for the Montreal CPR team during the 1929-30 season.

The Montreal Maroons were watching, and signed Kerr as a free agent on September 2, 1930.

In 1934, after bouncing up and down between the NHL and their farm teams , Windsor Bulldogs and Philadelphia Arrows, Kerr was sold to the New York Rangers to replace Andy Aitkenhead. It was there he played the last seven years of his career and achieved his greatest glory.

Kerr was most notable for his time with the New York Rangers. His four shutouts in a single playoff season in 1937 is a Rangers record (since tied by Mike Richter), and Kerr also backstopped the Rangers to the 1937 Stanley Cup Finals, losing to the Detroit Red Wings.

In 1937-38, Kerr was selected to the NHL Second All-Star Team. It wasn't until 1939-40 when everything fell into place for Kerr, as the Rangers won the 1940 Stanley Cup championship, when he beat Toronto 3-2 in overtime in game 6, winning the Cup in his hometown. That year, Kerr won the Vezina Trophy as the NHL's best goalie with a 1.54 GAA and eight shutouts, and had a 19-game unbeaten streak (14-0-5). He was also selected to the NHL First All-Star Team that year.

Kerr retired from professional Hockey at the end of the 1940-41 season, with his final Rangers game on March 25, 1941 (Rangers at Detroit Red Wings) playoffs.

Kerr was the first Hockey player on the cover of Time Magazine, doing so on the March 14, 1938 edition.