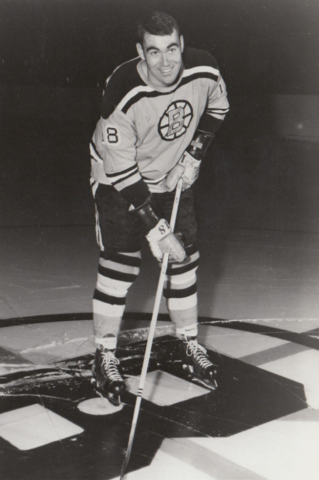 Westfall played his junior Hockey for the Barrie Flyers from 1957 to 1961, while also playing a few games for the Kingston Frontenacs in 1960.

Westfall's professional career began in 1961 when he suited up for 63 games with the Boston Bruins. He was known as a defensive specialist and the Bruins were not disappointed with what they had. Westfall scored just twice while assisting on nine others in his first year. Westfall started the 1962-63 season in Boston, but was sent down to their minor league team, the Kingston Frontenacs to finish the season.

Westfall had a surprise waiting for him by Kingston Frontenacs coach Harry Sinden. Harry used Westfall on right wing as opposed to defense. Being a defensive defenseman he naturally became a defensive specialist up front as well. He also produced nicely offensively, scoring 5 goals and 16 assists in 21 games.

Westfall returned to the Bruins the next season, while also playing 13 games for the AHL Providence Reds, and by 1964, he was firmly ensconced on Boston's checking line.

Westfall's first notable offensive season came in 1964-65, when he managed 12 goals and 15 assists in 65 games. His mandate was to keep the opposition away from Bruins' goaltenders Eddie Johnston and Gerry Cheevers, and he performed that function admirably.

The 1969-70 season was a breakthrough year for the Bruins, and Westfall was on the ice when the Bruins won the Stanley Cup on Bobby Orr's championship-winning goal in overtime of game 4 against the St. Louis Blues. Westfall played in all 14 playoff games, scoring three goals and adding five assists.
The following year the Bruins were an offensive powerhouse, and even defensive specialists like Westfall benefited from playing with the likes of Orr, Esposito, Hodge, and Bucyk. Westfall netted a career-high 25 goals and 34 assists for 59 points. The Bruins seemed like a lock to take their second consecutive Cup. However, a rookie goaltender out of Cornell University had other ideas. A 23-year-old named Ken Dryden, a 6'4" 215-pounder from Hamilton, turned in one of the greatest goaltending performances in NHL playoff history, shutting down the Big Bad Bruins in the semi-finals. From there Montreal went on to defeat the Chicago Blackhawks to win the Cup.

Westfall also scored the second of the three fastest goals in NHL history, when the Bruins scored three goals in 20 seconds in a 1971 game with the Vancouver Canucks.

Westfall was selected by the New York Islanders on June 6, 1972 in the expansion draft. The club wanted his experience to help the younger kids learn the ropes. And, with all expansion teams, there were growing pains. Westfall scored the first goal in franchise history in their first game against the Atlanta Flames on October 7, 1972. The club failed to make the playoffs during Westfall's first two years there.

Westfall went on to serve admirably for the Islanders, spending 7 seasons on Long Island. He was named the Islanders first ever Captain, and provided a large measure of leadership to a young Islander team that eventually led to four straight Stanley Cups. Unfortunately for Eddie, he retired at the end of the 1978-79 season, one year before the Isle's first Cup reign. Even though he doesn't have a championship title with the Islanders, his fingerprints are all over that dynastic team of the early 1980s. Westfall came from the Bruins and as the first Islanders captain installed high standards of professionalism and excellence that would serve the organization and its collection of incredible Hockey players extremely well.

Westfall retired from the NHL after the 1978-79 season at the age of 38, a veteran of 1220 games. Included in his career was 231 goals, 394 assists, 625 points and 4 appearances in NHL All Star games. He was also rewarded for his longevity and love of the game in 1977, when he was selected as the Bill Masterton Memorial Trophy winner.

After the end of his playing days, Westfall became the Islanders color analyst for what was then known as SportsChannel. He was often dubbed "18" by his confidant and broadcasting partner "Jiggs" McDonald because during his playing career he wore that number. He was also known by that nickname by his former Islander teammates. Westfall continued in that position until he retired in 1998.