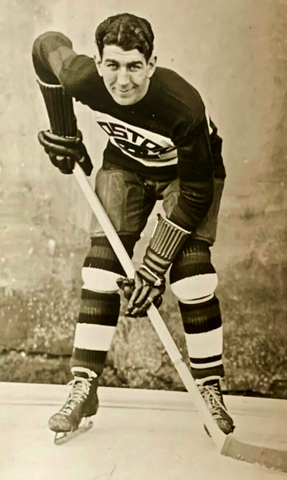 After the end of the New Edinburghs' playoffs that season, Hitchman was signed by the Ottawa Senators in 1923, first appearing in a victory against the Hamilton Tigers on February 28. Hitchman assisted on a goal by George Boucher at 13:40 of the 2nd period. He played the final 3 games of the season. The Senators would win the 1923 O'Brien Trophy as NHL Playoff Champions.

The first playoff game for Hitchman was tumultuous, a match against the Montreal Canadiens on March 7, 1923 at Mount Royal Arena in which future teammate Sprague Cleghorn - with whom he had been sparring all evening, crosschecked Hitchman in the face, knocking out some of Hitch's teeth and breaking his nose and knocking him out. Cleghorn received a match penalty for the act, which provoked a near-riot from the home crowd and an assault on the referee. Cleghorn was also suspended by his own team for the final game of the series. Ottawa won the first game 2-0 and the series 3-2 on total goals.

While too injured to play in the first Stanley Cup semifinal game against the Vancouver Maroons of the Pacific Coast Hockey Association / PCHA, Hitchman played in the three remaining matches, and Ottawa won the series 3 games to 1.

In the best of three finals against the Edmonton Eskimos of the Western Canada Hockey League / WCHL, Hitchman starred in a decimated Senators' defence, and scored the tying goal at 13:04 of the 3rd period, which sent the first game into overtime, won by the Senators on a goal by Cy Denneny. Ottawa won game two 1-0 and the 1923 Stanley Cup championship.

With the retirement of star defenceman Eddie Gerard, Hitchman became a regular for the Senators thereafter. Hitchman scored his 1st NHL goal on January 23, 1924 at 4:30 of the 3rd period vs John Ross Roach of the Toronto St. Pats. The Senators won 5-1

The 1926-27 season, with the dissolution of the Western Hockey League / WHL (Western Canada Hockey League), saw ex-Edmonton superstar Eddie Shore sign with the Bruins. Shore replaced the fading Cleghorn as Hitchman's defence partner, and was quickly recognized as the league's preeminent defence pairing. The two would team up for the rest of Hitchman's career, with Shore's rushing style paired with Hitchman's stay-at-home play. The Bruins lost to the Senators in the 1927 Stanley Cup Finals. This was the first Stanley Cup Finals to have games played in both Canada and the United States. 2 games ended in overtime ties, and Ottawa won the other 2 games with scores of 3-1. Originally intended to be a best-of-three series. After the first game was declared a draw (0-0), NHL President Calder ruled that the series would go no more than five games, with overtimes limited to 20 minutes. If the teams were tied after five games, the teams would share the championship. In the end, the series went four games because of two ties. These were the last ties in Stanley Cup history.

Rough play marred the series - in the final game, Lionel Hitchman and George Boucher were involved in a a wild fight. Ottawa police jumped onto the ice to help the referees and Hitchman and Boucher were ejected.

Hitchman's play during the season and playoffs was sufficient to receive a $1,400 bonus from his Boston team, the second highest awarded.

In the 1927-28 season, Boston would finish first in the American Division - the Bruins first 1st place finish. They would be the 1st American team to win the Prince of Wales Trophy, as American Division regular season champions.

At seasons end, and although the Bruins had players with far more name recognition, Hitchman was named captain, as former captain Cleghorn retired after the 1928 season.

Everything fell into place in 1928-29. Hitchman had a unremarkable offensive season with one goal and no assists in 38 games, during which he logged 64 penalty minutes, but he led a defence that was virtually impenetrable. The Bruins surrendered only 52 goals over 44 games, winning the 1929 Prince of Wales Trophy, as American Division regular season champions.

Boston gave up only three goals in five playoff games. After a three-game sweep of Montreal in the first playoff round, in which Hitchman assisted on the winning goal in game one (his only point in the playoffs), the Bruins allowed just one goal in the two-game sweep in best of 3 final with the New York Rangers winning the 1929 Stanley Cup championship, the 1st in franchise history.

The toughness of Hitchman was proven the following season when, During the second period of the March 1, 1930 game against Ottawa, his jaw was broken by a Shore clearing pass; he stayed in the match, playing the rest of the game without relief.

Hitchman would become one of the first Hockey players to wear a helmet, donning a leather helmet designed by Bruins' coach Art Ross to protect the jaw after sitting out for two weeks to recover. The helmet was credited with saving Hitchman from serious injury when he was slashed in the head by Montreal Maroons forward Hooley Smith in a subsequent match. Boston would win the Prince of Wales Trophy again, but would lose to the Montreal Canadiens in the Stanley Cup final, the first time all season they lost 2 games in a row.

During the 1930-31 season, Hitchman had only 2 assists, and 0 points in the playoffs, and the Bruins lost in the playoff Semi-finals. Boston did win the Prince of Wales Trophy again, becoming the 1st team to win it four years in a row.

Hitchman had a solid 1931-32 season, scoring 4 goals (3 assists), but Boston finished with the worst record in the NHL and failed to make the playoffs. Hitchman resigned the captaincy to George Owen after the season, but remained well-regarded enough as a leader to substitute for coach Ross as player-coach when Ross took ill in January 1933. Hitchman's interim stint was marred by a January 24 match against the Canadiens which included stick battles and the referee being knocked unconscious. The match provoked a league investigation and a furor played out in the press, ultimately leading to the resignation of Bruins' owner Charles Adams as a league governor. Boston did win the 1933 Prince of Wales Trophy as American Division regular season champions.

This was the last season in which Hitchman served as Shore's defence partner. The 1934 season proved his last, and slowed by injuries, he retired mid-season. His last match was February 22 against Hitchman's old Senators team, The Senators would spoil Lionel Hitchman Night on Feb. 22, 1934, scoring twice in overtime (you're better not knowing early rules) for a 3-1 victory.

The Bruins stalwart didn't leave the building empty-handed, carrying two checks of $500 each, one from team management, the other from fans, and a variety of gifts. The defenseman's stick and jersey were presented to his parents, who had travelled from Ottawa for the occasion. After the game, the Bruins announced that his #3 jersey would be permanently retired, the second professional sports team to do so, after the Toronto Maple Leafs retired Ace Bailey's #6.

Hitchman played a handful of games (4) at the end of the 1934 season for the minor league Boston Cubs, after which he hung up his skates for good.

Despite reports that he would succeed Ross as Bruins' coach and would not be asked to serve in the minor leagues, Hitchman went on to coach the Bruins' Boston Cubs farm team for two seasons; the Cubs folded thereafter, and he was named Ross' assistant coach for the Bruins the following year.