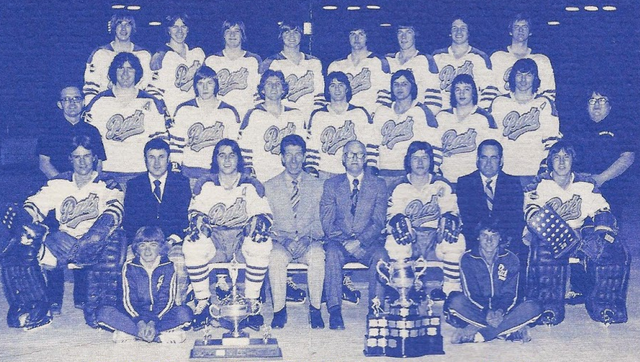 Regina had raced through the regular season, finishing at 43-14-11, for 97 points. The Pats could play tough and didn't mind playing on the road -- as their 17-10-7 record away from home showed -- although they were the least-penalized team in the league.
And they won six playoff games on the road; in fact, they won each of their three postseason series away from home.

There were 7,382 fans in the Calgary Corral for the final on May 12. They watched the Quebec Remparts, on goals from Charles Constantin, Perreault and Locas, take a 3-0 lead before the first period was 12 minutes old.
But Sobchuk promised some offence and then came through, scoring two goals and setting up another in the second period and adding another goal in the third as the Pats won 7-4.
Trailing 3-1 after the first period, Turner walked into the dressing room prepared to try to fire up his boys.
"Sobchuk got up and said, ‘You don't have to say a word',” Turner said. "He said, ‘We're going to win this game,' so I just turned around and walked out. They went out and played like gangbusters.”
Uhrich, named the tournament's all-star right winger, and Burdon, the all-star centre, also scored for Regina, as did Tudor and Gillies.
Locas added a second goal for Quebec in the third period.
"We've been down before and come back and we knew we could do it again,” Sobchuk said. "I think the turning point was when we started hitting them in the second period.”
Turner felt a unanimous decision by Gillies over Nantais at 13:10 of the second period turned it around. The score was 3-3 at the time, but Uhrich scored 1:13 after the fight, at 14:23, and Sobchuk added what proved to be the winner at 15:52.
Regina outshot Quebec 52-31 and only Remparts goaltender Bob Sauve kept it as close as it was.
"This,” said Turner, "means more to me than anything else in Hockey . . . even five Stanley Cups.”

It was Regina's first Memorial Cup title since 1930.