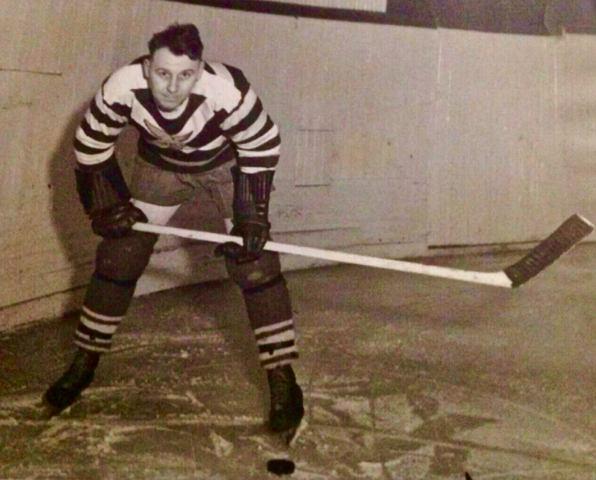 Pettinger's family moved to Regina, Saskatchewan when he was a boy, where he learned to skate and play Hockey on the river and local ponds.

While playing for the Regina Pats, Pettinger also played some games with the Regina Victorias, and after his junior career ended, he would play full time for 2 seasons. He helped the Victorias reach the 1925 semi-final and the 1926 final of the Western Canada Allan Cup Playoffs.

Pettinger signed as a free agent with the NHL New York Rangers. Pettinger never joined the Rangers, as his rights were traded a month later to the Toronto Maple Leafs, then two months later traded to the Boston Bruins, all while playing in Fort William.

Pettinger joined the Bruins for the 1928-29 season, playing his 1st NHL game on November 15, 1928. After going scoreless in 17 games for the Bruins, he was traded to the Toronto Maple Leafs. Pettinger scored his 1st NHL goal on January 24, 1929 vs George Hainsworth of the Montreal Canadiens in a 1-1 overtime tie.

Pettinger played another season with the Maple Leafs before being traded to the Ottawa Senators as part of the King Clancy deal. Pettinger played in only 13 games with the Senators before he was dealt to the International Hockey League's London Tecumsehs (Panthers), where he would play for the next 6 seasons, helping them win the 1934 league championship.

Pettinger rounded out his playing career with the Cleveland Falcons and Pittsburgh Hornets of the International-American Hockey League / IAHL in 1936-37.

After retiring, Pettinger became head coach of the University of Ontario's Hockey team in the CIAU from 1937 to 1938 and later junior B teams in Wallaceburg, Ontario.

INTERESTING NOTE
When the Boston Bruins won the Stanley Cup in 1929 they decided to use the rest of the ring that the 1926–27 Ottawa Senators had put on the cup. There was not enough room to include every official winning members. They had to leave off Red Green, Eddie Rodden, and Lloyd Klein. When the cup was redone during the 1957–58 season, Green, Rodden, Klein were added to the cup. They also included Hal Winkler (who spent whole season in the minors), Eric Pettinger and Frank Fredrickson (who were traded away from Boston, and under NHL rules should not be on the cup).