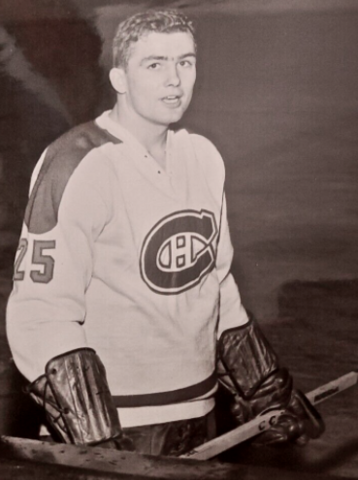 Hicke turned pro with the Rochester Americans for the 1958/59 season and set the American Hockey League / AHL on fire, scoring 41 goals, 56 assists during 69 regular season games, winning the Dudley "Red" Garrett Memorial Award as rookie of the year, the John B. Sollenberger Trophy as scoring champion for the season and the Les Cunningham Award as AHL "Most Valuable Player" 1958-59. Hicke then made his NHL debut with the Montreal Canadiens on April 16, 1959 vs the Toronto Maple Leafs, a playoff game at Maple Leaf Gardens in a 3-2 Montreal win. The Canadiens went on to win the 1959 Stanley Cup championship and Hicke got his name on the cup for playing that 1 game.

Traded to the New York Rangers in 1964, Hicke had stints with the Minnesota Rangers in 1965-66 and the Baltimore Clippers in 1966-67, but remained a Rangers product until being drafted by the Oakland Seals in the 1967 NHL Expansion Draft. Hicke played for the Seals until a 1971 trade to the Pittsburgh Penguins. In November 1971 Hicke was traded to the Detroit Red Wings but never played for the parent club, instead joining their affiliates the Tidewater Wings and Fort Worth Wings from 1971 to 1972.

Hicke then played a single season for the World Hockey Association / WHA Alberta Oilers in 1972-73 before retiring as a player.

William “Bill” Hicke was inducted into the Saskatchewan Sports Hall of Fame in 1995.