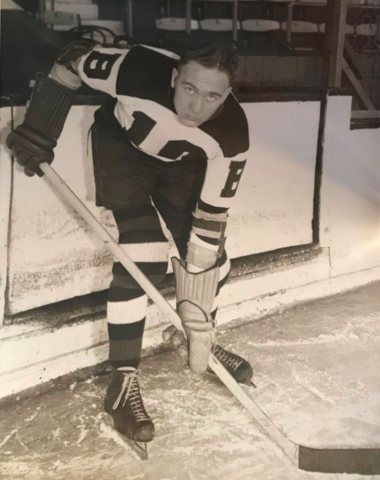 Motter played for the senior Melville Millionaires in the 1930-31 season.

Motter played his junior Hockey with the Regina Pats from 1931 to 1933, winning the 1933 Abbott Cup championship, as Western Canada champions.

Motter then played 1 season of senior Hockey with the Prince Albert Mintos for the 1933-34 season.

Motter split the 1935-36 season between the Bruins and the Cubs, then played played the following season with the Providence Reds in the IAHL.

Red Wings' general manager Jack Adams thought Alex would be better suited to defense. Motter hated the move but worked hard at his new position in order to stick with the Red Wings - and he did just that. Alex Motter played six seasons with the Detroit Red Wings, helping them to 3 straight Stanley Cup finals (1941, 1942 & 1943), winning the 1943 Stanley Cup championship, where Motter had 1 assist in game 3 of the finals.

Motter then played for the U.S. Coast Guard "Cutters" Hockey Team for the 1943-44 season, helping them win the championship for the Amateur Hockey Association of the United States.

Motter was later traded to the Cleveland Barons of the AHL by Detroit for cash, October 25, 1945, where he helped the Barons reach the 1946 Calder Cup finals.

Motter finished his Hockey Career in the AHL with the Springfield Indians (1946-47) and the Philadelphia Rockets (1947-48).