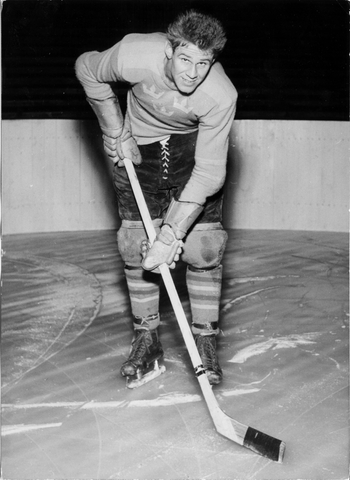 Johansson first became known as "Tumba" in the early 1950s since there were other players with the same last name, and he grew up in the Swedish town of Tumba. In October 1960 he married his wife Mona, and five years later he, along with Mona, legally changed his family name to Tumba.

Tumba was awarded the "Best Swedish Ice Hockey Player of All Times" in 1999.

Tumba would be named the 1st inductee / elected to the Swedish Hockey Hall of Fame on November 12, 2011.

Tumba was the inventor of the plastic Hockey helmet (sPAPs) and mouth guards in 1955.

Tumba started his ice Hockey / Bandy as a youth playing on Lake Aspen in Södermanland, near his home of Vretarna - Tumba, Sweden.

Tumba would join the local club Viggbyholms IK where he would play his junior Hockey (Viggins).

Tumba would then join the club Djurgårdens IF in 1950 on the advise of Filip Karlsson, who was the director of minor Hockey there. Filip Karlsson would be a big influence on Tumba's career.

Tumba would play for Djurgårdens IF from 1950 until 1966 - All in Division 1 of Swedish Hockey.

Djurgårdens IF has retired the number 5 in Tumba's honor.

Tumba made his Swedish National Hockey Team debut on December 12, 1951 in Stockholm, playing in a International exhibition game vs the United States. Tumba would score 5 goals in the game, playing center between Hans Öberg and Holger Nurmela. Sweden would defeat the United States team 10 to 1. The 5 goals Tumba scored in his debut has never been equalled.

Tumba would stay with the Swedish National Team for the 1952 Winter Olympics, where he would score 7 goals in the tournament, and help Sweden win the Bronze medal.

Tumba and the Sweden National Team would win their 1st World Ice Hockey Championship in 1953 in Switzerland, and were undefeated in the tournament. Canada, United States and the Soviet Union did not send teams to the tournament, and the Czechoslovakia team withdrew from the tournament as they were called home when it became obvious that their President, Klement Gottwald, was going to die from pneumonia he contracted at Stalin's funeral.

Tumba has stated his greatest memory for ice Hockey was in the 1957 World Championships at the Palace of Sports of the Central Lenin Stadium in Moscow on March 5, 1957. The Sweden team would play the Soviet Union in the championship game if front of more than 50,000 people - the largest crowd of the century for a game of ice Hockey. Tumba was a marked man during the game by the Soviets, but he also chose to follow another Soviet player, thereby neutralizing 2 Soviet players, and giving his wingers Eilert Määttä and Erling Lindström open spaces where they would score important goals.
Sweden opened with two goals, but the Soviets responded with 4 goals of their own. Down by two in the third period, goals by Eilert Määttä and Erling Lindström tied the game, and the goaltending of Thord Flodqvist and play of Tumba guaranteed the final draw. The USSR had previously only tied Czechoslovakia, so all Sweden needed was one point, or a tie, for the championship. At the end of the game, thousands of Russian fans invaded the pitch asking for autographs from Swedish players, and Tumba being the most requested. The Russian fans chanted his name Tumba, Tumba, Tumba and even launched him into the air and would carry him for several minutes around the stadium. Tumba was named Best Forward in the tournament.
OF NOTE: This was the last World Championships played on natural ice; and were the first World Championships held in the USSR and they are remembered for the political circumstances surrounding the games. Hungary had been recently occupied by the Soviet Army (to suppress a revolution in October and November 1956), and as a result, the United States and Canada boycotted the World Championships in protest. Joining them were Norway, West Germany, Italy and Switzerland. East Germany was participated at the top level for the first time, and Japan, competed for the first time since 1930, and finished last with one point in the standings.

Tumba was the first European player to attend an NHL training camp, with the Boston Bruins in 1957, and played 1 exhibition game vs the New York Rangers. Tumba was offered a tryout with their minor league team, the Quebec Aces. He played five games for the Aces and collected four assists. He was offered a rookie contact for $50,000.

Tumba however didn't sign a professional contract. Some say it was because back then it would have meant that he would have lost his amateur status. Since he wanted to represent Sweden further on the international stage he turned it down and returned to Sweden and Djurgården.

Brian McFarlane proposes a different scenario in his Original Six book series The Bruins. He quotes Johansson suggesting the reason he did not catch on in Boston was because of a practical joke he played on his unsuspecting teammates.

"I don't think the Bruins accepted me and I'm sure it was because of a practical joke I played on them one day. I saw that they all joked around with each other in the dressing room and I liked that. I wanted very much to be a part of it. I noticed they all put their false teeth in little cups before a game or practice When they went on the ice I sneaked back into the room and switched all the teeth around. Did they laugh at my little prank? No, were they ever mad. From then on it was very cool between us. A few days later the manager took me aside and told me he was sending me to Quebec.

Here are some of Sven Tumba Johansson Hallmarks as a player: