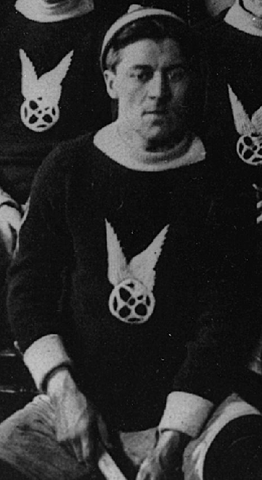 John Calder "Jack" Marshall (March 14, 1877 – August 7, 1965) was a Canadian Professional Ice Hockey player, and was one of Montreal's finest all-around athletes in the first half of the 20th century, starring at rugby, soccer, baseball, lacrosse, and bowling. Marshall played for the Winnipeg Victorias, Montreal Hockey Club, Montreal Shamrocks, Montreal Wanderers, Toronto Pros and Toronto Blueshirts. Marshall was a member of six Stanley Cup championship teams for four different clubs. He won his first Stanley Cup in 1901 with Winnipeg Victorias. He then joined the Montreal HC and won two more Cups in 1902 and 1903. He also won the Stanley Cup with Montreal Wanderers in 1907 and 1910. Marshall won his sixth and final Cup as a player-manager with the Toronto Blueshirts in 1914 - He led the FAHL in scoring with 11 goals, of which six were scored in one game, in 1904 and again in 1905 with 17 goals in eight games. He tallied a five-goal game in each of the 1907 and 1908 seasons and is the 1st player in Hockey history to win the Cup with four different teams - Born in Saint-Vallier, Quebec, south-east of Quebec City, Marshall moved to Montreal and played high school hockey for Pointe-Saint-Charles, starting in 1894. In 1898, he made the jump to senior level play when he moved out west and started play with the Winnipeg Victorias. He played with the Victorias until 1901, winning the Stanley Cup in a challenge with Montreal Shamrocks - After the season, he moved back home and joined the Montreal Hockey Club. As one of the "Little Men of Iron", the club won the Stanley Cup in 1902 and 1903. Along with several other players of the club, he left in 1903 to form the new Montreal Wanderers. He played two seasons with the Wanderers before he moved to Toronto. In 1905-06, he played with the new Toronto Professionals in exhibition play. In 1906, he returned to Montreal, and he played for the Montreal Montagnards in 1907, joining the Wanderers after the Montagnards disbanded. The Wanderers won the ECAHA title that season and successfully defended their Stanley Cup championship of 1906 in challenges - However, he did not stay with the club beyond that season. He moved to the Montreal Shamrocks and played two seasons for the Shamrocks before returning to the Wanderers for the 1910 NHA season. He helped the Wanderers to another Stanley Cup win that season, the club's last in its history. He stayed with the organization until 1912, when he returned to Toronto to join the new Toronto Hockey Club team. After Bruce Ridpath retired as manager in 1913, Marshall took on the responsibility while continuing to play for the team. He would win another Stanley Cup with the Torontos in 1914. The following season was cut short due to appendicitis and he only played four games. In all, he played three seasons for the Torontos before he returned to the Wanderers in 1915 for two seasons, before retiring from hockey in 1917 - Marshall was inducted into the Hockey Hall of Fame in 1965