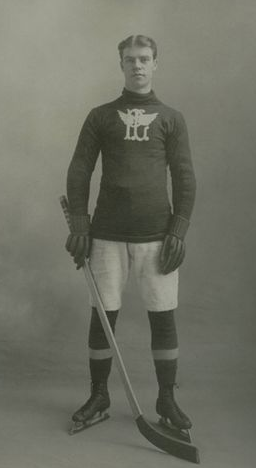 Holden scored the first goal, in the first game, of the very first professional Hockey league game on December 9, 1904 in the Pittsburgh Duquesne Gardens.

The Winnipegger played for Portage Lake from 1904-1907, teammate of Cyclone Taylor and Bad Joe Hall, as they won three championships together in the International Hockey League, Holden was three times an all-star in that league.

According to N.J. Gillespie, writer for the Winnipeg Tribune Magazine, March 11, 1933. Gillespie tells of watching Barney play in Houghton as a youth, and said in the article that Holden would "stand at his position as cover point, now about where the blue line is located, and "laze" a puck over the heads of all and sundry that would find the goal, every time, unless the goal guard was lucky enough to see it coming and block it." "In those days of early hockey, the lighting system was not so good, and when you shot a puck into the air nobody could see it. I have seen "Barney" score goal after goal by shooting a high one the length of the rink that would nestle in the net without the goalie ever knowing it was coming. In the season of 1906-07, playing against the Pittsburgh pro team, in the first five minutes of the second half a player's skate ripped his [Holden's] shoe wide open. He played more than 25 minutes of hockey until the game was ended. When he reached the dressing room, this youth [Gillespie] was there to wait on him, as usual, and drew off his shoe and poured blood out of the shoe. A surgeon took seven stitches in his foot that night." "In those days, hockey players played 30 minutes, and after a 10 minute rest they played 30 more minutes. And if they were hurt enough to have to leave the game, they couldn't get back into the lineup. Unless they were knocked out so cold they had to be carried off the ice, they always stayed in the line up. Those surely were the days of the he-man Hockey, mates." Gillespie wrote.

This photo belongs to me. You are certainly welcome to use it, just give me the credit. I loaned the image to Connie at Copper Co. My name is Dan Holden and Barney is my grandfather. ;-)