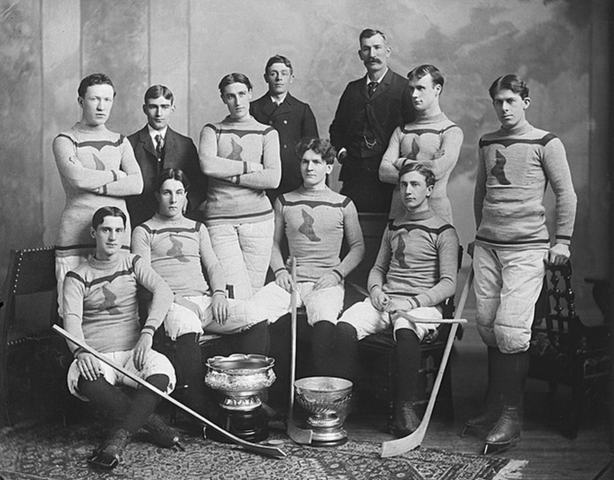 The Shamrocks won the Stanley Cup on March 1,1899 by defeating the Montreal Victorias 1-0 before 8,000 people in the new Montreal arena at the corner of Wood and Ste-Catherine streets. On March 14 they defended the cup 6-2 in a challenge from Queen’s University..

When the Montreal Shamrocks defended the Stanley Cup against Queens University, the game was played one half under Ontario rules and one half under those of Quebec. This came under a provinsion for all Cup challenges - in case where both teams could not come to terms on which regulations to play under, both would be used. The Montreal Sharocks defeated Queens University 6-2, in their only challenge of the winter. Harry Trihey scored the game winner.

In 1899 goal nets were used for the first time and later that year the rules of Hockey were modified by Farrell and Trihey. Players could no longer lift the puck and there was greater emphasis on stick-handling.

The Shamrocks won the Cup again in 1900 when they defeated the Winnipeg Victorias on February 16, and successfully defended the title against Halifax on March 7, 1900.