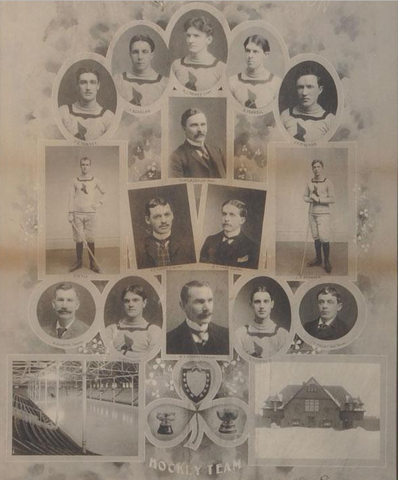 In mid-season (February), the Shamrocks faced Winnipeg in the first best-of-three challenge to go the limit. The series was evenly played with only one goal separating the teams in each contest. Harry Trihey was the offensive star again with seven goals in three games, including three in the finale.
The Winnipeg club, which had become noted for its innovations, introduced a new hockey stick which had the upper edge of the blade tapered, making it much lighter and considerably more modern. The end of the 1900 season saw the Montreal Shamrocks finish atop the CAHL standings again. Having thus retained their Stanley Cup title, the Shamrocks soundly turned back an attempt by the Halifax Crescents of the Maritime Hockey League to take the Cup. Montreal's Arthur Farrell established a new Stanley Cup record with four goals in each game to lead the champs.