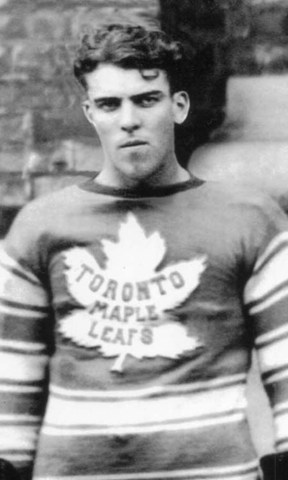 The Toronto St.Patricks aquired 20 year old George Patterson on Feb. 1 1927 from the Hamilton Tigers of the Can-Pro circuit in exchange for $5000 and the loan of Al Pudas. Just over two weeks later, on Feb. 17 he would score the first ever goal for the newly re-named Toronto Maple Leafs.

Conn Smythe officially purchased the St.Pats on Feb.14, 1927 and christened them the Maple Leafs in honour of his military experience in the first World War. They would play their last game as St.Patricks two days later losing to the Detroit Cougars 5-1 at Windsor Arena in front of a reported 150 spectators.

On Feb. 17, the Maple Leafs took to the home ice at The Arena Gardens to play the New York Americans. They were adorned in "bright new uniforms with a large maple leaf on the front and trimmed with green". In the book, "The Lives of Conn Smythe" by Kelly McParland it's noted that Smythe was somewhat fearful that "the players might be able to declare themselves free agents and demand more money on the basis that the old team had ceased to exist. To avoid this, Smythe added the old name St. Pats in small letters on the front of the new jerseys until the end of the season."

New York would tally first in that match on a goal by Billy Burch at 4:30 of the first period. George Patterson tied it at 9:40 of the second and Ace Bailey scored 35 seconds later to take the lead. Bailey and Bert Corbeau added markers in the third for a 4-1 Leaf win. Toronto would finish the season 7-4-1 under the new moniker yet still miss the playoffs thanks to an 8-19-4 start.

Patterson collected 4 goals and 2 assists in 17 total games in his rookie season but would be dealt to the Canadiens in February of the following season. He played a total of 284 career games also skating for the Americans, Boston, Detroit and St.Louis Eagles