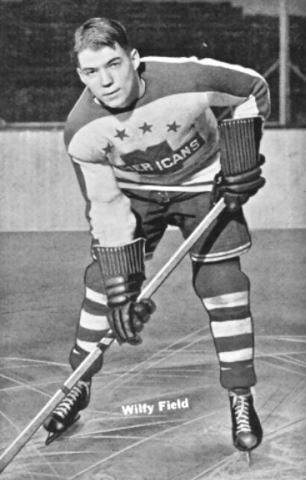 Field played all his minor and junior in Winnipeg, and played two years with the local Monarchs of the Manitoba Junior Hockey League / MJHL, helping the Monarchs win the MJHL Turnbull Cup, Abbott Memorial Cup as Western Canada champs and the Memorial Cup championship in 1935.

Field turned pro with the IAHL's Providence Reds in 1935-36 season. He was called up by the New York Americans for his first two NHL games, making his NHL debut on January 30, 1937 at the Montreal Forum. He spent spent two more years in the minors waiting for a chance at the big leagues.

Field became a regular with the Americans at the start of the 1938-39 season, and helped anchor the Americans' defence for the next four seasons, including 1941-42 when the team played one last year in Brooklyn. He scored his 1st NHL goal on Wilf Cude of the Montreal Canadiens on February 19, 1939 at 6:30 of the 1st period.

During World War II he skated with the RCAF teams in Winnipeg RCAF and the Calgary RCAF Mustangs as well as the Ottawa Commandos. On September 11, 1943, he rights were transferred from the defunct Americans franchise to the Montreal Canadiens in the Special Dispersal Draw. Field played nine games with the Canadiens then was loaned to the weak Chicago Black Hawks for the remainder of the 1944-45 season. He played 39 games in the Windy City.

Loaned to Buffalo of the American Hockey League / AHL by Montreal with Frank Eddolls, Ken Mosdell and cash for the loan of Lorrain Thibeault, October 24, 1945., and then signed with the AHL's Buffalo Bisons for the next three years, helping them win the AHL Calder Cup championship in 1946.

Wilf Field is a Honoured Member of the Manitoba Hockey Hall of Fame inducted in 1999.