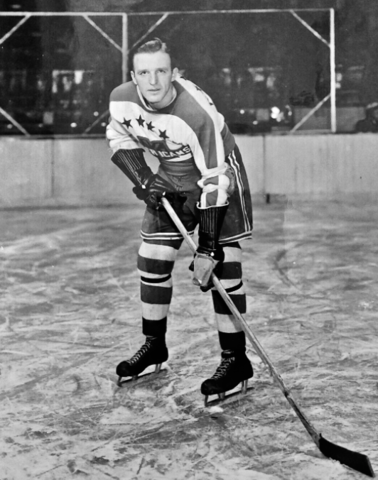 Anderson turned pro the next season with the Philadelphia Arrows of the Canadian–American Hockey League / Can-Am, playing 3 seasons in Philadelphia. The Arrows sold Anderson to the NHL Detroit Red Wings on May 8, 1934.

Anderson made his NHL debut on November 11, 1934 at the Detroit Olympia. He scored his 1st NHL goal on November 17 vs Wilf Cude of the Montreal Canadiens at 8:45 of the 1st at the Montreal Forum. It was the game winner in a 3-0 victory.

Anderson only played 27 games for the Red Wings, and another 25 games for their farm team, the Detroit Olympics before they sold him to the New York Americans on October 11, 1935.

Anderson would star for the Americans for the next 7 seasons, helping them reach the 1938 Stanley Cup semi-finals. The Americans defeated the Rangers in the quarter finals, with the 3rd and deciding game going to the 4th overtime. Anderson had 1 goal in the Rangers series, then 4 assists in the semi-final vs Chicago, as the Black Hawks won the series, then the Stanley Cup.

The New York Americans became the Brooklyn Americans for the 1941-42 season, and Anderson was named team captain and was switched from left wing to defence. The Americans finished last in the NHL, but Anderson had 41 points (12 goals) to set the league record for a defenceman at the time. He was also named to the 1942 First NHL All-Star team.

The Brooklyn Americans, never played a game in Brooklyn. They shared Madison Square Garden in Manhattan with their rival New York Rangers. The only Brooklyn thing about the Americans was where they practiced, at a tiny rink across the East River - the Brooklyn Ice Palace.

Anderson won the 1942 Hart Memorial Trophy as the NHL's most valuable player, becoming the first player to win the award while on a team that missed the playoffs (last place). Only Chicago goalie Al Rollins being the only other player to follow suit in 1954.

He was the last Hart Trophy winner to play for a non-Original Six team until 1973, when Bobby Clarke of the Philadelphia Flyers won the award.

Anderson is one of the three (alongside Al Rollins and José Théodore) to win the Hart Memorial Trophy and not get selected to the Hockey Hall of Fame.

The Brooklyn Americans ceased operations after the 1941-42 season, and the players were distributed among the Original Six teams in a dispersal draft. The Toronto Maple Leafs claimed Anderson. He showed up at training camp in the fall of 1942, but then decided to enlist in the Canadian (Infantry) Army and never played in the NHL again.

After 3 years of Army service, Anderson returned to pro Hockey, playing the 1945-46 season with the Providence Reds of the American Hockey League / AHL.

Anderson finished his Hockey career with the Hollywood Wolves of the Pacific Coast Hockey League / PCHL during the 1946-47 season, where he became player-coach. One of Anderson's assignments was to tutor young defenseman Bill Barilko.