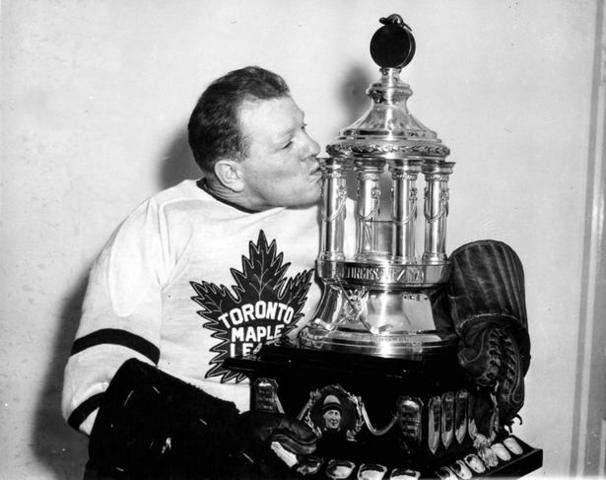 Broda played his entire career for the Toronto Maple Leafs of the National Hockey League (NHL).

Broda earned the nickname by which he came to be universally known because of a grade school history lesson. The teacher anecdotally mentioned that an English king had been called 'Turkey Egg' behind his back because of the large freckles that dotted his round face. A classmate pointed to Broda and exclaimed, "Look at Walter. He looks like a turkey egg, too!" The class guffawed and soon, the young Broda was tagged with 'Turkey Egg,' which over time was shortened to 'Turkey' and finally evolved into 'Turk.'.

In 1933-34, Turk played goal for the Winnipeg Monarchs, and Detroit Red Wings' scout, Gene Houghton, convinced the Wings' management to put him on the team's negotiation list.
While Detroit was blessed with great depth in goal (John Ross Roach was with the NHL club, Normie Smith was picked up from the NHL's St. Louis franchise as an understudy and to play with the Detroit Olympics of the International Hockey League, and Earl Robertson was loaned to the Windsor Bulldogs of that same IHL), Detroit signed Broda to a C-Form contract.

Broda served as the Wings' practice netminder (or 'target,' as the shooters referred to practice goalies) while playing with the Olympics. He drew widespread acclaim during an exhibition series in 1935-36 when his Olympics were pitted against the parent Red Wings in a three-game series labelled the City Series. Broda stood on his head, and the Olympics tied one and won the other two games. The Olympic went on to win the Turner Cup that season as champions of the IHL

On April 7, 1936, Turk Broda was a spectator at the Detroit Olympia as the hometown Red Wings were facing the Toronto Maple Leafs in Game Two of that spring's Stanley Cup final. Broda, playing for the Detroit Olympics of the International Hockey League, often watched the Red Wings play. The Wings trounced Toronto 9-4 that night, giving them a two-game lead on their path to the Stanley Cup. That night, Leafs' president realized that he would soon need a replacement for 40-year-old George Hainsworth, and began thinking about the goaltender he'd need for the 1936-37 campaign. His first inclination was Earl Robertson, owned by the Red Wings but loaned to the Windsor Bulldogs of the IHL. Smythe planned to stay in Detroit an extra night so he could watch Robertson and the Bulldogs take on the Detroit Olympics, also at The Olympia.
That night, April 7, the Olympics, with Broda in net, dumped Robertson and Windsor, 8-1. But more importantly, Conn Smythe saw the future, and it was Turk Broda.

Smythe purchased Broda from Detroit for the exorbitant price of $7,500 (some state $8,000). The hockey world was stunned. Many pundits thought that the Red Wings had cheated Toronto, but Smythe was confident. "Broda could tend goal in a tornado and never blink an eye," he said. "And you can blame any carelessness on youth. He'll outgrow that in a hurry."

Broda was starting to emerge as one of the league's top goaltenders. In the 1940-41 NHL season, he led the league in wins with 28 in 48 games. Turk's outgoing style made him hugely popular with Leafs fans and loved by his teammates. "The Leafs pay me for my work in practices," he joked, "and I throw in the games for free." His first stint with the Leafs lasted until 1943 and included the historic Cup of 1942, the Leafs won the Stanley Cup when they were down 3 games to none against the Detroit Red Wings. The Maple Leafs made one of the greatest comebacks in NHL history and took the Cup by winning the next 4 games.

In 1942-43, Broda joined the army for 2 and a half years during World War II - which primarily consisted of playing Hockey in England. When he was discharged in 1945, he went straight to the Gardens and resumed practicing with the team, rejoined the Leafs partway through the 1945-46 season. That team was substantially different than the one he left, with new blood in the form of youngsters Ted Kennedy, Jimmy Thomson, Gus Bodnar, Bill Ezinicki and Gaye Stewart. Yet, just a year from having captured the Stanley Cup in 1945, the Maple Leafs missed the playoffs, finishing fifth.
The team rebounded and formed one of the great NHL dynasties. With Broda shining in goal, the Toronto Maple Leafs won the Stanley Cup three springs in succession -- 1947, 1948 and 1949. In 1948, Turk won the Vezina Trophy for a second time, and was also named the NHL's First Team All-Star goaltender.

The Maple Leafs would win another Stanley Cup in 1951, by this time, 35-year-old Broda was in the twilight of his career (and the oldest player in the NHL), and he split the season in goal with Al Rollins. The two netminders were terrific, and Rollins finished with a 1.75 goals-against average in 40 games. Broda had a 2.23 average in 31 games. The combination had the best goals-against average in the league, and the Leafs had hoped that the NHL would allow the netminders to share the Vezina Trophy, but the rules stated that the award went to the goaltender with the best average, so Rollins was the lone recipient. The Leafs finished with 41 wins, 16 losses and 13 ties, a dominant season yet astonishingly, came second to the Detroit Red Wings, who became the first NHL team to finish with more than 100 points in a season.

In the Stanley Cup final, one of the most celebrated in the NHL's history, the Maple Leafs and Canadiens battled fiercely. Every single game was decided in overtime, but in Game Five, played on April 21, 1951, tragic young hero Bill Barilko scored the Stanley Cup-winning goal to give the Maple Leafs their fourth Stanley Cup in five seasons. "I couldn't beat him. Toe Blake couldn't. None of the Canadiens could," Maurice Richard said after that series.

Broda played the entire season in goal in eight of his 11 seasons, and part of two others, leading the league in shutouts twice.

With intentions of playing one final season, Broda readied himself for the 1951-52 campaign, but after playing part of one game, realized he was finished. Broda retired having played 629 regular season NHL games, of which he won 302, lost 224 and tied 101. He recorded 62 shutouts during that time. In post-season play, he won 60 (13 by shutout) and lost 39 in 101 playoff contests.

Broda was accorded a special night at the Gardens by Conn Smythe, one of the rarest honors bestowed upon a Leaf. That night came on December 22, 1951, and players and executives from Toronto, the opposing Bruins and every other NHL team gathered to pay respects and was given gifts and accolades to one of the greatest goalies of all time.

Following his playing career, Broda coached for many years, including being behind the bench for Memorial Cup championships in 1955 and 1956 with the Toronto Marlboros.

Turk Broda was inducted into the Hockey Hall of Fame in 1967.

On January 1, 2017, in a ceremony prior to the Centennial Classic, Broda was part of the first group of players to be named one of the '100 Greatest NHL Players' in history