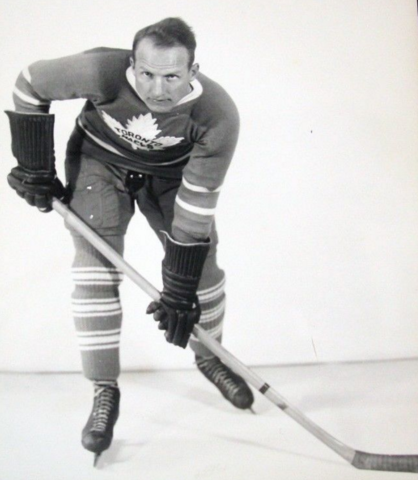 Day grew up playing Hockey first in Owen Sound, and then as a teenager on the rinks of Midland and Port McNicholl, Ontario. Day skated with the Midland Juniors, and while attending Midland High School, wore the uniform of its Hockey team.

Legend has it that he'd often walk from Port McNicoll to Midland (approximately three kilometres away) in the winter, for games at the town's Casino Rink.

Day would then play senior Hockey in Hamilton with the Tigers of the Ontario Hockey Association / OHA from 1922 to 1924, before joining the varsity Hockey team at the University of Toronto, where he was studying pharmacy. It was there that Charlie Querrie, owner of the Toronto St. Patricks, and player Bert Corbeau observed Day play one night and knew immediately that he could contribute at the game's highest level. Querrie made up his mind that he wanted the left wing, and sent Corbeau to persuade Day to turn pro, though it would take a guarantee that he could continue his studies (in fact, he later ran a pharmacy from Maple Leaf Gardens. Eventually he gave up this business and Dick Dowling's Grill took its place), and a $5,000 salary, before Day joined the St. Pats. He debuted at left wing on December 10, 1924, on a line with Jack Adams and Babe Dye, and scored 10 goals and 22 points in 26 games. After his rookie year, he shifted to defense, where he spent the rest of his career.

Corbeau and Day formed a decent defence pairing, Corbeau putting up 121 penalty minutes while Day scored 14 goals, though the St. Pats only won 12 of their 36 games. Day scored 11 goals in 1926-27 in 44 games, though again the St. Pats were not a good team, going 15-24-5. It was during that season that Conn Smythe and others purchased the team and transformed the St. Patricks into the Toronto Maple Leafs.

Smythe recognized early that Day had strong leadership qualities, and named him Team Captain for the start of the 1927-28 season.

Unfortunately for Day, there would be a minor setback when he suffered an achilles heel tear on February 2, 1928, when another player stepped on the back of his leg. He tried to return to action, but the injury triggered an onslaught of further maladies that cost him the rest of the season, limiting him to only 22 games. Day returned the next season, and missed only 15 games over the next 10 seasons.

Day and the Maple Leafs began improving, making the playoffs in the spring of 1929. But in October of 1930, a major trade saw Smythe acquire Francis ‘King’ Clancy from the Ottawa Senators, and would pair him with Day on the Maple Leafs blueline to create one of the best NHL tandems of the time.

Day was a marvellous team player who infused lots of humour into the team's dressing room, hence he was nicknamed "Happy". The jolly Leafs teams during Day's stay were affectionately known as "The Gashouse Gang" because of their love for humour.

Day was always in the shadow of Clancy and Boston's Eddie Shore, but there was no doubt he was a top defenseman of his era. Offensively he was a constant threat, although unlike Clancy and Shore was never flashy. Defensively he was a genius. He was a masterful stick checker and positional player, and, along with the New York Rangers Ching Johnson, was the league's top body checker. Day was very well respected around the league, even though he employed a clutch and grab style of Hockey he would later popularize as a coach, becoming a league power by using the rule-bending tactic.

The Maple Leafs team got progressively better, making the playoffs in the spring of 1931, but losing in the quarter-finals. The next season, construction on the new Maple Leaf Gardens was completed. In the spring of 1932, the Leafs christened their new home, Maple Leaf Gardens, with the team's first Stanley Cup championship under Conn Smythe's management and Day scored a key goal. In a two-game, total-goals semi-final against the Montreal Maroons, the teams tied the first leg 1-1. In the second game, Day made a spectacular rush - something defense players rarely did then - to tie the score and send the game into overtime. Bob Gracie got the winner for the Maple Leafs and they moved on to the finals against the New York Rangers. Day scored three goals in the first two games and the Maple Leafs won the famous "tennis series" by scores of 6-4, 6-2 and 6-4. Toronto's 'Kid Line' of Busher Jackson, Charlie Conacher and Joe Primeau, in their first Finals, combined for eight goals. Toronto's coach Dick Irvin made his second straight Finals appearance, having coached for Chicago in 1931.

Day continued to play with the Maple Leafs and serve as Captain. His teams did not miss the playoffs again – in fact, they played in 3 more Stanley Cup Finals (1933, 1935, 1936). While still playing for the Maple Leafs, Day became coach of the West Toronto Nationals OHA junior team and led them to a Memorial Cup championship in 1936, and the next season he coached the Toronto Dominions to the OHA senior title before losing to the eventual Allan Cup winners, the Sudbury Tigers, in the provincial championships. This coaching would foreshadow Day’s later career.

The Leafs management decided an overhaul was needed. Clancy retired and other older veterans were gone from the 1936-37 team, and on September 23, 1937, Day was sold to the New York Americans. He played one season with future Hall of Famers Ching Johnson, Hooley Smith and Nels Stewart, but contributed only 3 assists, and retired from playing at seasons end in 1938.
His 11-year tenure as captain of the St. Pats/Maple Leafs is second only to George Armstrong.

Day then acted as a NHL referee for two years while coaching in the Toronto area, and fortune smiled on Day in 1940 when Maple Leafs coach Dick Irvin packed up and moved to Montreal to coach the Montreal Canadiens. Leafs owner Conn Smythe immediately hired Day as Irvin's replacement, and over the next 10 years he was the most successful coach in the NHL. In his first year the Leafs made it to the semifinals before losing to Boston in seven games. But in 1942 he coached the team to the greatest Stanley Cup comeback of all time. The Leafs lost the first three games of the finals to Detroit but stormed back to win four in a row and claim the Stanley Cup..

Day was a taskmaster who demanded the most from his men. Much to the dismay of some on-ice officials, he knew the rule book inside out and could quote it verbatim. In all, he won five Cup championships as coach of the Leafs: in 1942 and 1945, then three in a row from 1947 to 1949 - the first time in NHL history that a Stanley Cup hat trick was accomplished.

Day was the winningest coach in Maple Leafs history until Punch Imlach passed him; Day still ranks second on the franchise wins list behind Imlach.

Smythe promoted Day to assistant general manager in 1950. His name was engraved on the cup a 7th time in 1951. In 1955, Smythe gave Day control over most hockey operations, but remained general manager on paper. Just after the Leafs were eliminated in the playoffs in March 1957, Day was publicly embarrassed by Smythe, who told the media that he didn't know if Day was available to return to the Leafs for the following season. Officially, Day resigned, but behind the scenes he had been pushed out and was replaced by a committee headed by Smythe's son Stafford Smythe.

Day retired to enter business life, running Elgin Handles in St. Thomas, Ontario until selling it to his son in 1977. Day was almost convinced by Jack Kent Cooke to become the first general manager of the Los Angeles Kings in 1967, but he decided not to take the job, recommending Larry Regan instead.

Clarence "Hap" Day was elected to the Hockey Hall of Fame in 1961.