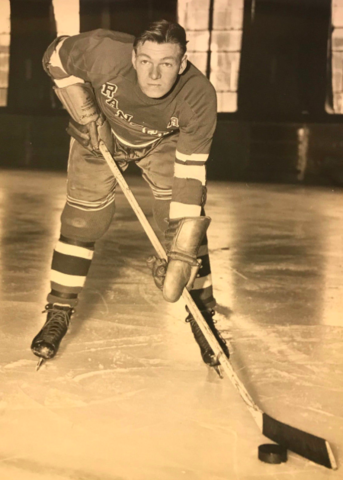 Stanowski finished his minor Hockey career with the East Kildonan Bisons, who were Juvenile Hockey Champions of Manitoba in 1935.

During the 1938 Memorial Cup, Stanowski received a bribe letter at his downtown Toronto hotel room between Memorial Cup games. "I was supposed to skate behind the net and pretend I was lacing my skate, which meant I'm going to go along with it."

After thinking the situation over, Stanowski, then an 18 year-old kid, knew he had to do the right thing.

"I gave the letter to my manager," Stanowski stated 73 years later. "I was going to do it as a gag, but I didn't just in case we lost."

And what compensation were the gangsters promising Stanowski for his co-operation ?

"They offered me $100," he replied without a hint of regret that he didn't sell-out. His reward came when the St. Boniface Seals won Canada's junior championship.

The Toronto Maple Leafs had acquired his rights in a trade with the New York Americans for Jack Shill, October 17, 1937, and after his junior season ended, they sent him to the Syracuse Stars of the International American Hockey League / IAHL for his first pro season.

Stanowski joined the Toronto Maple Leafs defence for the 1939-40 season. His first coach in Toronto was Dick Irvin. Stanowski finished second in voting for the Calder Cup that season. Stanowski also played 8 games for the IAHL Providence Reds during the season.

Conn Smythe Quote from October 1939 :
"He plays defence as though he was swivelled at the hips. He skates sweepingly with legs spread out. You can rock him but he is harder to knock down than Joe Lewis."

In 1940-41, Hap Day, a former Maple Leafs defenseman took over the coaching duties in Toronto. Stanowski was partnered with Bingo Kampman on the blue line.

Under new coach, Hap Day, Stanowski's game flourished in his second season in Toronto. He earned a spot on the 1941 First All-Star Team, joining Boston's Dit Clapper. This achievement was one of Stanowski's fondest memories.

During the 1941-42 season, Stanowski only played in 24 regular season games, scoring 1 goal, but would become a big part of the Maple Leafs during the playoffs. Toronto would reach the finals of the 1942 Stanley Cup vs the Detroit Red Wings, The Maple Leafs would lose the first 3 games, with Stanowski scoring in game 2. He also scored in game 4, as the Toronto mounted a comeback winning 4-3 in Detroit. In game 5 at Maple Leaf Gardens, Stanowski had his best ever playoff game, scoring 1 goal, 3 assists, as the Maple Leafs won 9-3. Toronto won game 6, by shutting out Detroit 3-0, and then in the first ever game 7 in Stanley Cup finals history, Toronto would win the 1942 Stanley Cup championship on home ice (before a record crowd of 16,218, it was the largest crowd to ever see a Hockey game in Canada) by defeating Detroit 3-1 in a unprecedented comeback, that has never been duplicated in finals history.

Stanowski's NHL time was interrupted due to World War II. He returned to Winnipeg along with his friend and fellow Maple Leaf, Pete Langelle, and served as physical fitness instructor in the RCAF. While in the service, Stanowski skated for the RCAF Bombers until early in the 1944-45 season. He then resumed his defensive position with the Maple Leafs.

Stanowski would play for the Maple Leafs for the next 4 seasons, winning Stanley Cup championships in 1945, 1947 and 1948. The fans in Toronto would know him as the "Whirling Dervish" and he would become a Maple Leafs legend.

Stanowski wasn't happy with not playing much during the 1947-48 season, and he spread a rumor with one reporter that he was going to retire after the season. The reporter let Conn Smythe about this, and he was traded to the New York Rangers with Moe Morris for Cal Gardner, Bill Juzda, Rene Trudell and the rights to Frank Mathers, April 26, 1948.

Stanowski played the entire 1948-49 season with the Rangers, but injuries would limit his playing over the next two seasons, then he was sent down to the Rangers farm team, the AHL Cincinnati Mohawks late in the 1950-51 season, where he later had a career ending injury on December 23, 1951, when his skates got tangled with the boards and he broke his left leg.

Stanowski was a rare talent in his era - a defenseman who rushed with the puck. He totalled 23 goals and 111 points in a 428-game NHL career with the Toronto Maple Leafs and New York Rangers.

Walter Peter "Wally" Stanowski is a "Honoured Member" of the Manitoba Hockey Hall of Fame, inducted in 1985.

Wally Stanowski was inducted into the Etobicoke Sports Hall of Fame in 2003.

Wally Stanowski was inducted into the Manitoba Hockey Hall of Fame in 2004.