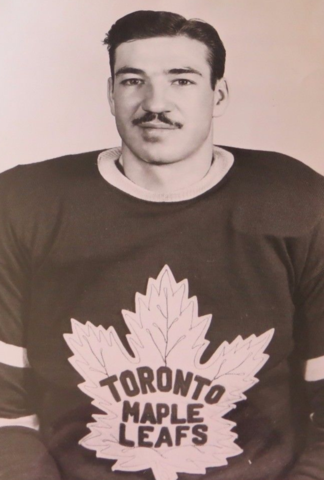 Moustache controversy was the trademark of Boesch. It started when he was 18 years old, and playing for the Notre Dame Hounds Junior Hockey team in Saskatchewan. A moustache in those days was not strictly forbidden but highly frowned upon by most junior and professional teams.

Boesch had recalled. "It caused a lot of commotion at the time, but I felt it was my right. It was not effecting my playing ability and I liked the look." Boesch was the property of the NHL's New York Americans in 1941. Americans' GM Red Dutton was told of Boesch's facial hair and his refusal to shave it. "If that's the case then he's got two strikes against him before he even gets to training camp." Despite the tough talk from the Americans, Boesch kept the moustache.

Boesch, who was unique in that he was the only NHLer to regularly wear a moustache during the 1940s.

Boesch was denied entry into the U.S. from Canada in 1941 due to wartime travel restrictions. Boesch played in the minors for three years with the Regina Rangers and the Lethbridge Maple Leafs and missed the 1943-44 season at the height of the War.

He returned to sporadic action in 1944-45 playing with the Winnipeg RCAF and was back playing Hockey full-time the following season with the Pittsburgh Hornets. Boesch's rights had been transferred to the Toronto Maple Leafs in a special Dispersal Draft in 1943 and it was then that he finally got his shot to play in the NHL. With the moustache still plainly visible, Boesch suited up for 35 contests with the Leafs in 1946-47 scoring four goals and nine points.

Boesch was partnered defensively with Bill Barilko. The two became famous for the "Maginot Line Knee Drop," as both players would simultaneously drop to their knees to block enemy shots.