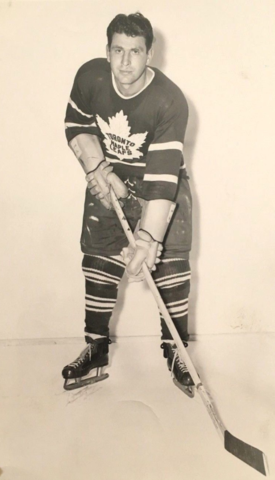 Lynn played his minor Hockey for the Kinsmen in Saskatoon, moving up to the Saskatoon Embassys in 1940, and then signed with the Saskatoon Jr. Quakers in 1941, getting in some Memorial Cup playoff experience in 1942 with the Quakers.

Lynn was signed by the New York Rangers in 1942, and played just 1 game for them in the NHL, spending the 1942-43 season with their farm team New York Rovers in the Eastern Amateur Hockey League.

In 1943, Lynn signed with the Detroit Red Wings organization, but failed to impress the team's management in the 3 games he played. As such, Lynn was sent to play for the Indianapolis Capitals of the American Hockey League / AHL. It was there that he encountered former NHLer and current AHL referee Rabbit McVeigh. McVeigh noticed Lynn's aggressive, hard-working style of play. He also noticed that the youngster had a ret-hot temper that could, if not contained, limit his chances to make it to the top. On occasion, the sage ref would issue Lynn a penalty with an admonition to settle down and learn to take hard knocks with a cooler head.

Lynn also played for the Saskatoon Navy Hockey team in 1944, along side future teammate Harry Watson.

Lynn then signed with the Montreal Canadiens in 1945, but once again saw limited games, playing in just 2 NHL games that season, and spending the season with their farm team, the AHL Buffalo Bisons. Lynn excelled in Buffalo, scoring 26 goals, 25 assists in the regular season, and 5 goals, 5 assists during the playoffs, helping the Bisons win the 1946 AHL Calder Cup championship.

It was at that time that Toronto Maple Leafs' GM Conn Smythe was in search of some fresh talent to spark his sagging club. During a chance meeting with Rabbit McVeigh, he got a tip to watch young Lynn as a possible solution to his roster woes. Smythe did just that and ended up bringing the speedster to Toronto, as Lynn was traded to the Maple Leafs by Montreal (Buffalo - AHL) with Dutch Hiller for John Mahaffy and Gerry Brown, September 21, 1946.

As a Maple Leaf, Lynn joined Howie Meeker and Teeder Kennedy to form "The K-L-M Line" The trio clicked for three seasons of outstanding Hockey with Stanley Cup victories in 1947, 1948, and 1949. During the tail end of his stay with the Maple Leafs, Lynn teamed with Joe Klukay and later Johnny McCormack to form outstanding penalty-killing combinations.

On November 16, 1950, Lynn was traded to the Boston Bruins with Bill Ezinicki for Fernie Flaman, Leo Boivin, Ken Smith and Phil Maloney, where he played for a short time before heading to the minors with the Cleveland Barons of the AHL for 2 seasons.

Lynn was traded to the Chicago Black Hawks by Cleveland for future considerations (Fred Glover, January 16, 1953), January 4, 1953. The Black Hawks is where Lynn played his final 47 NHL games.

Vic Lynn is the only player in NHL history to suit up for all six original teams.