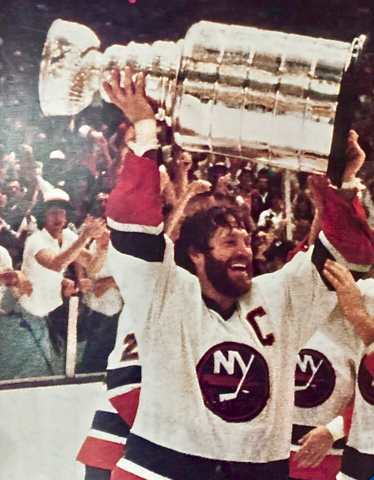 Potvin made his NHL debut with the New York Islanders on October 10, 1973 vs Atlanta Flames at Omni Coliseum in a 1-1 tie.

Potvin scored his 1st NHL goal vs Ed Giacomin of the New York Rangers on October 2, 1973 at 4:54 of the 1st period at Nassau Veterans Memorial Coliseum in a 3-2 Islanders win. Potvin had 2 goals in the game.

Potvin was the first NHL defenceman to reach 300 goals during regular season play, and 1,000 career points.

Potvin was the first player to reach 100 playoff assists in NHL history.

Denis Potvin was inducted into the Hockey Hall of Fame in 1991.

Denis Potvin was inducted into the Ottawa Sports Hall of Fame in 1991.

Denis Potvin was inducted into the Nassau County Sports Hall of Fame in 2002.

Potvin's jersey #5 was retired by the Islanders on February 1, 1992, the first such honor bestowed by the franchise.

NOTE
Potvin has quoted about the 1982-83 Islanders team "I am not going to be humble about it," Potvin said. "I think it's the best team in the history of the game."