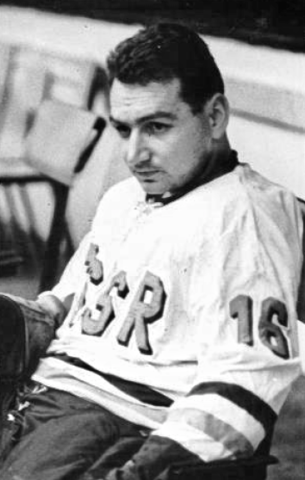 At the 1969 IIHF World Ice Hockey championships, Jiřík and teammate Jaroslav Holík led the Czech team’s rebellion against Soviet influence by covering up the red star on their jerseys with tape for the March 28th game vs the Soviets, a 4-3 Czech victory. The Czechs would only win the IIHF bronze medal at this tournament, but by defeating the Soviets, not just once, but 2 times at the tournament, they had won and the whole country of Czechoslovakia knew it. Wild celebrations and anti-Soviet protests erupted in the streets of many Czech cities.

Jiřík caught the eyes of former scout and assistant St. Louis Blues GM Cliff Fletcher, who entered into negotiations with the Czech authorities to acquire the rights to Jiřík. He was originally supposed to have been one of three Czechoslovak players picked to play in the NHL, but the Communist authorities had second thoughts about letting two younger players in their twenties accompany him. So, Jiřík, then 30, made the journey to play for the St. Louis Blues on his own.

Jaroslav Jiřík is best known in North American as the first Eastern European / Eastern-Bloc trained player to play in the National Hockey League / NHL, although it was only three games with the St. Louis Blues during the 1969-70 season. He also played 53 games that year with their farm club, the Kansas City Blues of the American Hockey League (AHL), scoring 19 goals (16 assists).

Jiřík also represented many players as a sports agent.

Jiřík died near the city of Brno, about 125 miles from Prague. While flying his own plane he recently acquired, a ultralight one-seater crashed shortly after takeoff from the Brno Medlanky airport and caught fire.