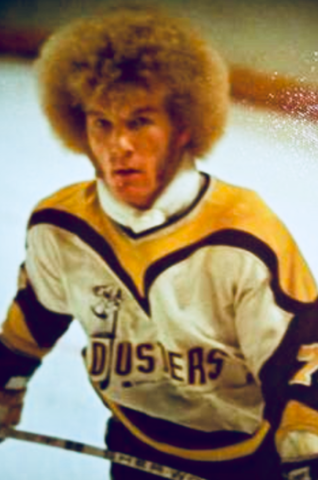 He also played for the WHA's Minnesota Fighting Saints for three playoff games that season.

Goldthorpe started the 1974-75 season with the Blazers, playing 2 games before joining the Syracuse Eagles in the American Hockey League / AHL for 9 games, then finishing the 1974-75 season in the World Hockey Association / WHA Michigan Stags/Baltimore Blades franchise.

Goldthorpe played for the WHA San Diego Mariners and Denver Spurs/Ottawa Civics during the 1975-76 season, finishing the season with the Broome Dusters in the NAHL.

Goldthorpe then played the 1976-77 season with the Richmond Wildcats of the Southern Hockey League / SHL, the New Haven Nighthawks and Toledo Goaldiggers during the 1977-78 season.

Goldthorpe was generally only used as an enforcer, a man once dubbed the "wildest, meanest, most unpredictable player in Hockey.

Goldthorpe occasionally showed he had some skill as well; with the San Diego Hawks (1978-79), Goldthorpe scored 13 goals and 28 points in 39 games (and led the league with 267 penalty minutes). He was given tryouts by both the Toronto Maple Leafs and Pittsburgh Penguins and appeared in exhibition games, but never played a regular-season NHL game.

In 1980, Goldthorpe was shot by a drug dealer while trying to intervene on behalf of an ex-girlfriend. His kidney and urinary tract were damaged, derailing his career; he spent the next two years recovering. Goldthorpe returned to professional Hockey in 1983 with the Moncton Alpines for one game, then finished the season playing senior hockey in New Brunswick with the Riverview Trappers. It was his last season of competitive ice Hockey.

Goldthorpe is best known as the inspiration for Ogie Ogilthorpe in the 1977 film Slap Shot. According to Ned Dowd, brother of "Slap Shot" writer Nancy Dowd (and a Hockey player in his own right), the character incorporated elements of Goldthorpe (especially his wild demeanor and frizzy, Harpo Marx-like haircut), but was not actually him.