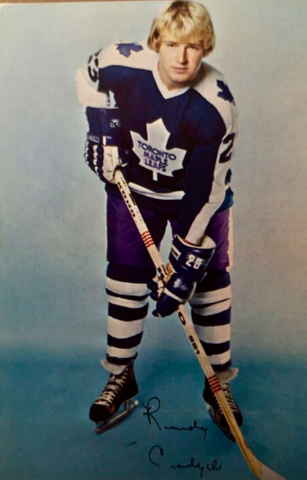 Carlyle made his NHL debut with the Toronto Maple Leafs on October 5, 1976 vs Colorado Rockies at McNichols Sports Arena in a 4-2 Rockies win.

Carlyle scored his 1st NHL goal vs Gary Edwards of the Cleveland Barons on January 13, 1978 at 17:50 of the 2nd period at Coliseum at Richfield in a 5-2 Barons win.

Randy Robert Carlyle is a "Honoured Member" of the Manitoba Hockey Hall of Fame, inducted in 1995.

Carlyle also enjoyed a successful coaching career in the IHL, AHL and NHL, winning the 2007 Stanley Cup championship with the Anaheim Ducks