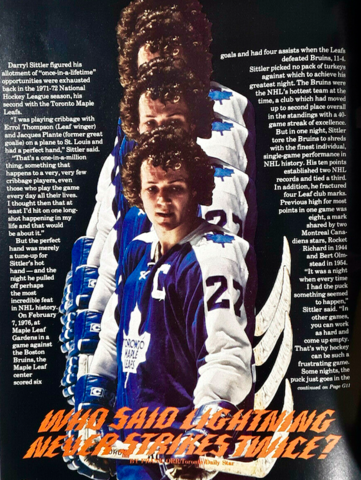 Darryl Sittler set a NHL scoring record that might never be broken - 6 Goals & 4 Assists in one game.

The Toronto Maple Leafs captain had recently been called out by team owner Harold Ballard, as the Maple Leafs had won just 1 game in the previous seven games (1-4-2) and were 21-20-11 during the season to that point.

The Boston Bruins were on a roll, having won 7 games in a row and riding a 15-1-1 surge. Rookie goaltender Dave Reece was in the nets for Boston, who was 7-4-2 as the backup to Gilles Gilbert.

Darryl Sittler finished the NHL regular season with 41 goals, 51 assists and achieving his 1st 100 point season as a Hockey player. He had 5 goals, 7 assists in the playoffs, as the Maple Leafs lost to Philadelphia in the 1/4 finals.

Sittler scored the final goal of the 1976 Canada Cup, as with less than two minutes into the second half of the overtime period, Sittler received a pass from Marcel Dionne as he skated into the Czechoslovak zone close to the side boards. As Czech goalie Vladimír Dzurilla came out to challenge, Sittler faked a shot that froze the goaltender, took two more strides then fired the puck into an open net. The goal touched off a wild celebration amongst the Canadian players on the ice and the fans in the Montreal Forum. Sittler's championship winning goal remains one of the most famous in Hockey history.