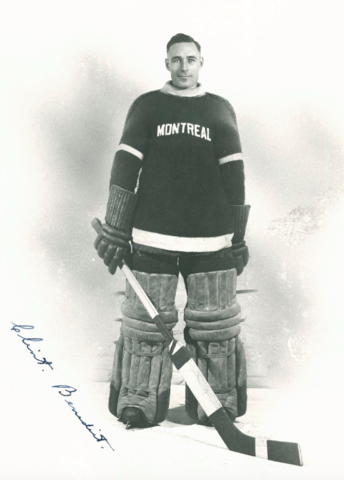 Benedict was likely the first goaltender in the National Hockey League / NHL to wear a face mask. On February 20, 1930, Benedict of the Montreal Maroons wore a leather face shield during a 3-3 tie against the New York Americans, to protect facial injuries from previous games.

Benedict joined the Ottawa Senators of the National Hockey Association / NHA in the 1912–13 season. Although the Senators had at the time future Hall of Famer Percy LeSueur as their starting goaltender, Benedict played 10 games for the club. He played one more season as backup to LeSueur and took over as starting goaltender in the 1914–15 season. He led the league in Goals Against Average (GAA) that season and the following two seasons to start his career. Benedict also backstopped the Senators to the 1915 Stanley Cup finals, losing to Vancouver.

Benedict truly blossomed when the Ottawa franchise became one of the founding members of the National Hockey League / NHL in 1917-18. On February 25, 1918, he recorded the second shutout in NHL history when the Senators blanked the Canadiens 8-0. The losing goaltender that night was Georges Vezina, who had registered the NHL's first blank sheet a week earlier. For six of the seven years he spent in Ottawa, Benedict led the NHL in wins. He was part of one of the game's early dynasties when he helped the Senators win three Stanley Cups in four seasons - 1920, 1921 & 1923. His most impressive season was arguably 1919-20, when his 2.66 goals-against mark was 2.13 goals better than the league average, a mark that was never equaled.

After winning three Stanley Cups with the Senators, his career changed in the 1923–24 season. Benedict developed was begining to have trouble with longer shots, and he blamed it on eyesight problems, but it turned out to be his drinking, which at first was kept secret by the Senators. Benedict occasionally played for the Senators while under the effects. In the playoffs, Benedict and the Senators played poorly and were quickly eliminated. Management withheld some of his salary for his behaviour. Benedict sued the team in return and the Senators countersued, revealing in court documents the extent of Benedict's behaviour. Once the Ottawa papers found out about the court case, the secret was out. The two sides quickly settled to minimize the publicity.

Benedict starred with four shutouts and a 1.00 goals-against average when Montreal won the Stanley Cup in 1926. This last triumph gave Benedict the distinction of being the first netminder to backstop two different NHL teams to the Stanley Cup. He was virtually impenetrable in the four-game championship set against Victoria with a 0.75 goals-against mark, where he also became the 1st goaltender to have 3 shutouts in a Stanley Cup finals.

Benedict would have 1 last Stanley Cup finals, as he helped the Maroons reach the 1928 finals vs the New York Rangers, the Rangers won the best of 5 series 3-2, but Benedict had 2 shutouts in both Montreal victories, and the other 3 games were decided by 1 goal, including a overtime game.

Benedict played the 1930-31 season with the Maroons' farm club, the Windsor Bulldogs of the International Hockey League / IHL and backstopped the Bulldogs to the IHL championship in what proved to be his career finale.

Benedict was one of the Greatest Goaltenders in the history of the game. A innovator while also making history. He played during the same era as Georges Vezina, having a better average then Vezina.

Throughout his career he remained loyal to his original thin, cricket-style pads even when the larger leather pads were popularized in the 1930s.

Benedict was also an accomplished lacrosse player in the off-season, playing for the Ottawa Stars Lacrosse Club and the Ottawa Capitals as a professional.

Clinton ‘Clint’ Stevenson Benedict was inducted into Ottawa Sport Hall of Fame in 1966.