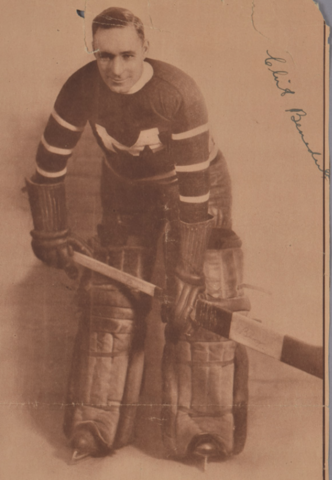 Benedict was the first goaltender in the National Hockey League / NHL to wear a face mask.

Benedict played senior-level Hockey at 17, playing for the Ottawa Stewartons of the Ottawa City league in 1909–10, moving to the Ottawa New Edinburghs of the Inter-provincial Amateur Hockey Union the following season. Benedict joined the Ottawa Senators of the National Hockey Association / NHA in the 1912–13 season. Although the Senators had at the time future Hall of Famer Percy LeSueur as their starting goaltender, Benedict played 10 games for the club. He played one more season as backup to LeSueur and took over as starting goaltender in the 1914–15 season. He led the league in Goals Against Average (GAA) that season and the following two seasons to start his career.

Benedict truly blossomed when the franchise became one of the founding members of the NHL in 1917-18. On February 25, 1918, he recorded the second shutout in NHL history when the Senators blanked the Canadiens 8-0. The losing goaltender that night was Georges Vezina, who had registered the NHL's first blank sheet a week earlier. For six of the seven years he spent in Ottawa, Benedict led the NHL in wins. He was part of one of the game's early dynasties when he helped the team win three Stanley Cups in four seasons - 1920, 1921 & 1923. His most impressive season was arguably 1919-20, when his 2.66 goals-against mark was 2.13 goals better than the league average, a mark that was never equaled.