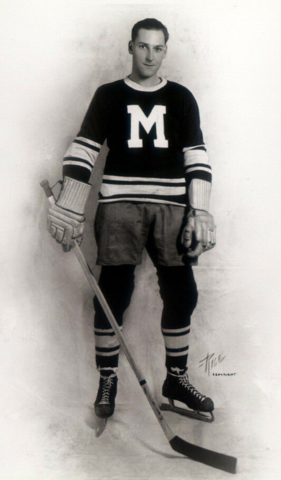 Northcott remained with the Maroons for the start of the 1929-30 season, scoring 10 goals, 1 assist during the season.

Northcott split the 1930-31 season with the Maroons and their farm team the IHL Windsor Bulldogs, finishing the season in Montreal.

Northcott was then put on a line with Jimmy Ward and Hooley Smith for the 1931-32 season, scoring 19 goals, 6 assists.

Northcott had his best season points wise during the 1932-33 season, scoring 22 goals, 21 assists and was voted to the NHL First All-Star Team at left-wing in 1933.

Northcott didn't score as much during the 1934-35 regular season with only 9 goals, 14 assists, but in the 1935 NHL playoffs, he led all playoff scorers with four goals (1 assist). 3 of the those goals were big ones, as in the Quarter-finals vs the Chicago Black Hawks, a 2 game total goal series, Northcott scored the only goal of the series, a overtime winner in game 2. Then in the semi-finals vs the New York Rangers, another 2 game total goal series, Northcott scored the game winner in the first game (2-1) with game 2 ending in a 3-3 tie, and Montreal won the series 5-4 on goals. As fate would have it, in the 1935 finals vs the Toronto Maple Leafs, a best of 5 final, Northcott scored in game 2, and then in game 3, Northcott had 1 assist and scored what proved to be the 1935 Stanley Cup championship winning goal, as Montreal swept the Maple Leafs in 3 games.

Northcott continued to score for the Maroons during the 1935-36 and 1936-37 seasons with 15 goals each season, and he was also selected to play in the Howie Morenz Memorial Game on November 2, 1937 representing the Montreal All-Stars.

The "Great Depression" was taking it's toll on Hockey teams and attendance during the mid to late 1930s, and with 2 teams in Montreal, the Maroons folded after the 1937-38 season. Northcott was traded / sold to the Chicago Black Hawks with Earl Robinson and Russ Blinco for $30,000, September 15, 1938, where he would play his final season in the NHL, retiring at the end of the 1938-39 season.

After he retired, Baldy Northcott coached the 1940-41 Winnipeg Rangers to the 1941 Memorial Cup championship.

Lawrence "Baldy" Northcott is a "Honoured Member" of the Manitoba Hockey Hall of Fame, inducted in 1985.