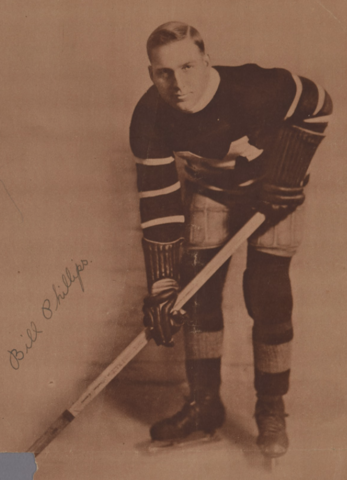 Phillips served in World War 1 with the 63rd Depot Battery Regiment, and returned to Hockey in 1919 with the Sault Ste. Marie Greyhounds, where he stayed for the next 6 seasons. Phillips played a big part of the Greyhounds team during their 1924 playoff run, winning the 1924 Allan Cup championship.

During the 1926 NHL playoffs, Montreal went on to beat the third seed Pittsburgh Pirates and then defeated the first place Ottawa Senators 2 goals to 1 in a two-game total goals series, thus capturing the Prince of Wales Trophy and the right to play the Pacific Coast Hockey Association / PCHA Victoria Cougars for the Stanley Cup. Phillips scored 2 goals in the first round and this was reported about Phillips when playing the Senators
"Bill Phillips, who has been the sensation in the Maroon camp since he joined pro company one month ago after a Meteoric career with the Soo Greyhounds, was the bright performer for the Maroons. Phillips paved the way for Seibert's goal. He poked Frank Nighbor out of action and offensively was the pivot of many Maroon attacks. But it was Phillips' courage under a heavy gruelling which brought him the greatest commendation. He was a target throughout the game. He stood his bumps gamely and came back for more. In the second period he was knocked dizzy by a clout from Finnegan. He was relieved, but back in action within five minutes."