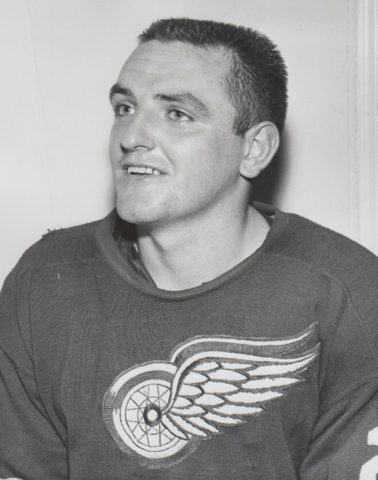 Kennedy played all his early Hockey on Prince Edward Island, enjoyed some early success with the Charlottetown Abbies, then played junior Hockey with the Halifax St. Mary's team in the Nova Scotia junior league during the 1952-53 season. Kennedy had a great playoff run in 1953 that caught the attention of the Montreal Canadiens scouts who signed him and sent him to the Jr. Canadiens of the Quebec Junior Hockey League / QJHL. Kennedy played for the Jr. Canadiens for 3 seasons, helping them reach the finals of the 1956 Eastern Canada finals for the Memorial Cup.

Montreal then traded him to the Chicago Black Hawks with Ed Kachur for $50,000, May 24, 1956. Kennedy played his 1st NHL game on October 11, 1956 vs the Detroit Red Wings, and would play the rest of the season in Chicago, scoring his 1st NHL goal on October 30th vs the Boston Bruins.

Chicago then traded him to the Red Wings with Johnny Wilson, Hank Bassen and Bill Preston for Ted Lindsay and Glenn Hall, July 23, 1957. Kennedy played 2 full seasons in Detroit, and part of a 3rd season before they sent him to their minor league affiliate, the Edmonton Flyers of the Western Hockey League / WHL. He also played for the American Hockey League / AHL Hershey Bears during the season.

Kennedy then played the 1960-61 season for the WHL Spokane Comets, having a breakout year as a pro, scoring 23 goals, 38 assists and a whopping 165 penalty minutes.

The next season, Kennedy was back playing for the Edmonton Flyers, having another strong season with 20 goals, 31 assists when the Red Wings brought him back up to the NHL, where he played the final 14 games of the season, scoring just 1 goal.

Kennedy started the 1962-63 season back playing for the Flyers, when Detroit traded him to the Boston Bruins for Andre Pronovost, December 3, 1962. He played for the Bruins for the next few seasons before the Bruins sent him to the WHL San Francisco Seals in the spring of 1966, where he played the final 6 games of the season.

The WHL San Francisco Seals became the California Seals to start the 1966-67 season, and Kennedy played the full season for the Seals.

Kennedy was then claimed by the Philadelphia Flyers from Boston in the NHL Expansion Draft, June 6, 1967. H He spent nearly two full years as a checker for the expansion Flyers, and became a fan favourite in Philadelphia with his hard nosed play, leading the team in penalties both seasons he played there.

Kennedy was then traded to the Toronto Maple Leafs with Brit Selby for Gerry Meehan, Mike Byers and Bill Sutherland, March 2, 1969, playing the final 14 games of his NHL career in Toronto. Kennedy's most infamous game was marked by a violent incident in the 1969 Stanley Cup playoffs in Boston, as Pat Quinn delivered a massive hit to Bruins star Bobby Orr, knocking him unconscious. Kennedy responded to the incident by partaking in four fights before punching a linesman and getting ejected from the game. He received a lengthy suspension and his tenure with the Toronto Maple Leafs ended.

Kennedy played one last season of Hockey in the 1969-70 season for the AHL Buffalo Bisons, playing 23 games.

Kennedy began a long coaching career when he coached the Cape Breton Metros of the Maritime Junior A Hockey League in their first year of existence in 1969-70 then coached the Halifax Junior Canadians in 1970-71. He was brought in to coach the Summerside Crystals of the PEI Junior Hockey League in 1971-72 and 1972-73 before leaving for the Los Angelas Sharks of the World Hockey Association / WHA to try to resume his playing career. That did not work out for Kennedy due to injuries so he ended his playing career and went back to coaching with the Winston Salem Polar Twins of the Southern Hockey League. Kennedy returned home a few years later to PEI and coached junior Hockey for a number of years.

Forbes Kennedy was inducted into the P.E.I. Sports Hall of Fame in 1968.