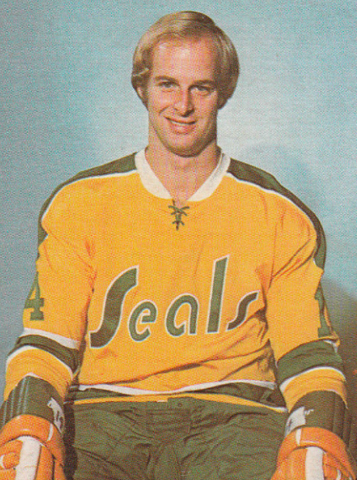 Patrick was sent by his family to Montreal, Quebec to play Hockey for the Lachine Maroons of the Montreal Metropolitan Junior Hockey League / MMJHL, where he played until joining the Montreal N.D.G. Monarchs in the 1964 Memorial Cup playoffs. He then joined the Montreal Junior Canadiens in the Ontario Hockey Association / OHA for the 1964-65 season, and then the Los Angeles Hechter Hawks for the 1965-66 season.

Patrick earned a scholarship from the University of Denver (Denver Pioneers), starting in 1966. He proved to be a prolific goal scorer in his first season with 18 goals, 16 assists. Patrick helped the Pioneers to NCAA Ice Hockey Championships in 1968 and 1969, and graduated from the university with a degree in Business Administration in 1970.

Patrick joined the U.S. National Team program where he stayed two years. He played in both the 1970 and '71 World Championships for the United States while he was serving in the Army and also helped coach at West Point during this time.

Patrick signed with the NHL California Golden Seals as a free agent on October 6, 1971, scoring 8 goals as a NHL rookie. He also played 12 games with the AHL Baltimore Clippers during his first season as a pro.

Patrick was selected by Miami-Philadelphia in the 1972 World Hockey association / WHA General Player Draft on February 12, 1972.

Patrick played with the Golden Seals until he was traded to the St. Louis Blues with Stan Gilbertson for Warren Williams and Dave Gardner on November 11, 1974, and played there for 1 season.

Patrick was traded to the Kansas City Scouts with Denis Dupere and cash for Lynn Powis and Kansas City's 2nd round choice (Brian Sutter) in 1976 Amateur Draft on June 18, 1975, and played the 1975-76 season there.

Patrick was selected to be a member of Team USA at the inaugural 1976 Canada Cup tournament, scoring 2 goals, 2 assists in 5 games played.

Patrick had his WHA rights traded to the Minnesota Fighting Saints in June, 1976, and would play for the Fighting Saints to start the 1976-77 season, scoring 6 goals, 11 assists before the Saints folded, and would then be signed as a free agent by the NHL Washington Capitals on February 1, 1977. Patrick then finished the season in Washington, and played most of the next season with the Capitals, splitting the season with the AHL Hershey Bears.

Patrick finished his pro playing career with the CHL Tulsa Oilers and the PHL Los Angeles Blades during the 1978-79 season.

Patrick also served as captain for Team USA at the 1979 Ice Hockey World Championship tournament in Moscow, shortly before retiring from professional Hockey.

Patrick was then selected as Assistant General Manager and Assistant Coach under Herb Brooks for the 1980 US Olympic Gold Medal winning Hockey team, the Miracle on Ice.

With the success of the Miracle on Ice team, Patrick was quickly signed by the NHL New York Rangers, first as director of operations in 1980, then as assistant General Manager to start the 1980-81 season, and was also named Head Coach of the team after just 20 games into the season. At year's end, he was named General Manager of the Rangers on June 14, 1981, at age 34, becoming the youngest General Manager / GM in their history, and taking the same position his grandfather (Lester Patrick) had had more than half a century earlier. One of his first tasks in New York was to hire his USA coach, Herb Brooks, which he did for the start of the 1981-82 season. Patrick was the GM in New York and also served as Head Coach again during the 1984-85 season. The Rangers made the playoffs each year Patrick was in charge, but left the team (dismissed) in 1986 and accepted the position of director of athletics and recreation at his alma mater, University of Denver, a position he held for three years until he was hired as General Manager and Ex. VP of Hockey Operations of the Pittsburgh Penguins in December 1989. He also finished out the season behind the bench as coach.

Patrick then lured Badger Bob Johnson to coach the Penguins, as he had been serving as executive director of USA Hockey and President of USA Hockey. He also hired Scotty Bowman as director of player development and recruitment.

Then In June 1990, Patrick acquired Joe Mullen from Calgary for a second-round pick, and drafted Jaromir Jagr fifth overall. He later signed free agent Bryan Trottier, traded for Larry Murphy, acquired Czech center Jiri Hrdina to be a mentor and friend to the homesick Jagr. In March 1991, he traded for Ron Francis and Ulf Samuelsson.

The rest we say is history, as every piece necessary for a championship was in place. The Penguins won the Patrick Division, (named after his grandfather Lester), 1991 Prince of Wales Trophy and the 1991 Stanley Cup championship.

The Penguins won the 1992 Prince of Wales Trophy and the 1992 Stanley Cup championship also.

The 1992-93 Penguins won the President’s Trophy, set an NHL record with 17 consecutive wins and won the Patrick Division again. However, the Penguins lost to the New York Islanders in the playoffs, and the loss also meant Penguins owner Howard Baldwin was denied millions of dollars in playoff revenue. Baldwin had already spent the expected money on big contracts to Mario Lemieux and others. The financial fallout sent the Penguins organization careening towards fiscal insolvency. That Penguins core never again won the Wales or Eastern Conference and within five years, the franchise was in bankruptcy court facing extinction.

Patrick would become the longest-serving GM in Penguins franchise history and twice during his tenure he took over behind the bench, coaching the team briefly in 1990 and 1997. The Penguins also reached the Conference finals in 1996 and 2001.

Patrick was awarded the 2000 Lester Patrick Trophy (executive role), named for his grandfather, in the 1999–2000 season for his outstanding service to Hockey in the United States.

Patrick was also the General Manager for the 2002 US Olympic Ice Hockey team, also coached by Brooks, which won the silver medal – the first US Hockey medal since the 1980 team. During both Olympic tournaments, the Team USA defeated the Soviets/Russians.

From the 2001–02 season onwards, Penguins missed the playoffs in the next four seasons of Patrick's term as General Manager. After the 2004–05 lockout, in the 2005 off-season, Patrick drafted teen phenomenon Sidney Crosby with the first overall pick. Patrick also acquired veterans Ziggy Palffy, Sergei Gonchar, John LeClair and Mark Recchi. While 18-year-old Crosby became the youngest player in NHL history to score 100 points, the older free agents had little to show for the millions that Patrick spent on them (though Gonchar would remain a key player in 2008–09). The Penguins finished last in the Atlantic Division for the fourth consecutive time. After 17 years as Penguins General Manager, Patrick was relieved of his duties on April 20, 2006, when his expiring contract was not renewed by team president Ken Sawyer. Succeeding GM Ray Shero praised Patrick's selection of Marc-André Fleury, Crosby, and Evgeni Malkin, but also said that work had to be done to build up the depth and third/fourth lines for the long-term, rather than a quick-fix.

Patrick was initially bitter about his firing and stayed away from Hockey-related activities for a while afterwards. In 2008, Patrick accepted an invitation from Penguins owner Mario Lemieux to watch the game in the owners box where the Pittsburgh defeated the Philadelphia Flyers to take the Eastern Conference Championship. Patrick's later draft picks, Marc-André Fleury, Evgeni Malkin and Sidney Crosby were credited with the team's advance to the Stanley Cup Finals that year, where they lost to the Detroit Red Wings in six games. In 2009, 2016 and 2017 these players had instrumental roles in Pittsburgh's Stanley Cup championships.

Craig Patrick is the Owner and President of the Austin Bruins, a Tier II junior ice Hockey team in the North American Hockey League's Central Division.

Craig Patrick was inducted into the United States Hockey Hall of Fame in 1996.

Craig Patrick was inducted into the Hockey Hall of Fame in the builder category in 2001.

His cousin, Dick Patrick is a owner, president and alternate governor of the Washington Capitals.